Scientists at Nasa’s Jet Propulsion Laboratory in California celebrate as the InSight lander touches down on Mars, completing a seven-month, 458-million-kilometer journey from Earth. Video: Nasa 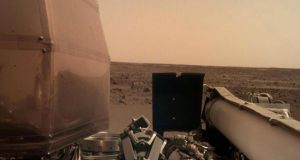 The latest automated lander to reach the surface of Mars set up camp last week on the surface of Mars and is already at work. InSight has sent back pictures and status reports on its various experiments and in the coming weeks will take the planet’s “vital signs” as revealed by its interior.

We have very little information about what goes on under the rocky soil of Mars and InSight will rectify that, measuring its interior temperature, answering questions about whether the planet has a liquid or solid core and measuring the thickness of the planet’s crust. InSight carries sensitive seismometers that will reveal whether the planet is ever rocked by “Marsquake” events and also show how frequently Mars is smacked by incoming meteorites.

The mission will start to get very exciting for the scientists analysing incoming data back on Earth, but the cost of getting InSight on to the Martian surface will as usual be criticised for its expense, which is currently at least $825 million (€726 million). And the funding for that came out of the National Aeronautics and Space Administration’s Discovery Programme that supports the low-cost exploration of the solar system. Non-governmental organisations and charitable organisations will imagine what they could have done if provided with only a fraction of that money.

Nearly every scrap of data returned by InSight as it begins its work will be fresh and new, adding significantly to our growing pool of knowledge about the red planet. Knowing more about it tells us about Mars but also informs us about what the early Earth might have been like based on the evolution of the red planet. This is knowledge for knowledge’s sake as it may help us better understand how the presumably living surface of a planet with plenty of water can fail to survive and eventually revert to a desert. There may be lessons to learn.

The long-term goal for Nasa until recently had been for a manned flight to Mars and back by 2030. This is what prompted the current cluster of satellite missions to Mars to get more information about conditions on the ground. Further down the road what we learn on the surface will be applied in the future if earthlings seek to colonise the planet, setting up habitation units, organising water and power production and finding new ways to feed ourselves.

All the components of getting a human there and back again carry technological challenges which in turn will add to our scientific understanding in areas such as biology (eg how to derive nutrition from easy-to-grow sources such as algae), electronics and engineering. All space programmes from the past have left electronic, engineering and communications discoveries in their wake, skills then picked up and converted into consumer products. You need lightweight, reliable, compact communications devices to maintain a link between Earth and Mars. The same kinds of technologies work pretty well in a modern smartphone. Compare a modern smartphone to the electronics that carried the Apollo 11 mission to the moon. It was wired into a computer that was about as smart as a cheap, low-cost calculator used today by primary school children.

A mission to Mars represents a huge scientific challenge in being able to get there in one piece, managing to land softly on the surface and then safely returning. The focus on Mars was a part of president Barack Obama’s vision of the future for the US space programme, but scientists had better get their Mars-directed missions under way quickly. Current president Donald Trump, in keeping with efforts to dismantle the Obama legacy, has now redirected the emphasis towards the moon. It is much easier to bridge the 363,100km gap from us to the moon than the hugely daunting 77.8 million km distance to Mars.

His interest in reaching the moon and setting up colonies there have also taken a surreal twist in that he wants to see the development of a military “space force” that will join the current triumvirate US air force, army and navy. No doubt advanced new technologies would emerge that could prove of benefit to human kind but the notion sounds too much like a trailer for the next Star Wars film than anything approaching reality.

Nasa is a bit of a hostage in this situation. Presidents are in a position to influence profoundly the direction of the administration as president John F Kennedy did when challenging it to reach the moon before the end of the 1960s. The question now worrying Nasa is what the balance will be between successful, low-cost programmes such as InSight and investments directed towards a space force and efforts to land humans on the moon again. There isn’t money to support both in any credible way, with Nasa carrying the can for having “failed” if it cannot deliver space craft that can fly about with apparently limitless energy supply or developing the technology needed to survive the harsh surface of the moon. Science can deliver the answers, breaking new ground as it does so, but can the US Congress stump up the finances needed to deliver someone’s pipe dream?