Meet the unexpected carmakers of the future 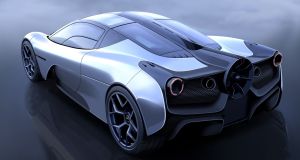 “Even Henry Ford failed the first time out.” Not the words of a scion of the Ford dynasty, but of Preston Tucker. Tucker, a maverick automotive genius whose company was brutally shut down by Detroit rivals when his car designs proved too futuristic (or a huckster who used the carrot of a new car company to defraud money from investors – up to you, really) said these very words just as his car company was taken away from him and closed down. A man of boundless enthusiasm, and not a little automotive engineering talent, one might wonder what Tucker would have made of the current crop of upstarts and newcomers, trying to break the stranglehold of the ‘legacy’ carmakers on the world’s car market.

Sony is the latest, and most surprising addition to the ranks of global carmakers – sort of. The company most famed for the Walkman and the PlayStation showed up at the Consumer Electronics Show in Las Vegas this year with the Vision-S. A neat-looking four-door saloon, with stylistic overtones of both Saturn and Tesla, it’s unlikely to make it through to actual production. Sony is instead using the Vision-S as a mobile test-bed and four-wheeled advertising hoarding for its automated driving technology – cameras, Lidar (a combination of laser and radar) sensors, and in-car touchscreen infotainment systems.

The fact that the Vision-S was built for Sony by Austrian carmaker Magna (which also builds cars under licence for the likes of Jaguar and Mercedes-Benz) is probably demonstration enough that Sony’s not trying to become the new Toyota. Still, Sony’s president and chief executive Kenichiro Yoshida said: “Creativity is a powerful driving force that moves Sony forward. When it is combined with our technology, it is unstoppable. Mobile has been the mega-trend of the last decade. I believe the next mega-trend will be mobility.”

Apple’s once much-hyped car project appears to be all but dead and gone. This year was originally supposed to have seen the first Apple cars rolling off the production line, but at best the idea of the Cupertino giant making an actual four-wheeled device seems to be dormant. More likely, Apple will go down the Sony road and offer its software and sensor technology to existing carmakers instead, as well as developing its Apple CarPlay technology that blends your phone with your car’s own touchscreen. It must hurt, though, that rival Sony actually got around to making at least one real, functioning, car when Apple seemingly couldn’t.

Is Fisker really a newcomer? it is a relatively young company, and its Ocean electric SUV is all-new, but the name comes from company owner Henrik Fisker, who has been in the car industry for decades, and was once the head of design for Aston Martin. The Ocean could, potentially, upset the market with Tesla-rivalling one-charge range and a price tag of less than $30,000 (€27,200). That said, Henrik is a man who has often promised what eventually couldn’t be delivered (the short-lived Fisker Karma plug-in hybrid, for example) so let’s withhold judgment until the Ocean actually comes in on the tide, eh?

Google was arguably the true instigator of the current boom in (supposedly) autonomous car technology (although such tech had been around before, not least as part of the European Prometheus project in the 1990s). The koala-lookalike Google car (no steering wheel, just a stop-start button) has been around in prototype form for several years now, but again Google (and its Waymo autonomous driving subsidiary) seems content for now to develop tech to put on other people’s cars – it has agreements with Fiat-Chrysler and Jaguar for vehicle supply right now. Of the big tech firms, Google is probably the most likely to actually build an entire car from scratch, but that prospect still seems a little distant.

Byton is one of the ever-expanding morass of Chinese-funded electric car start-ups. Many of these (and Faraday Future, we’re looking at you) have arrived with a bang of publicity, but dwindled with a faint hiss of vaporised finance. Byton appears to be different. Yes, it’s Chinese funded (for the most part) and the cars will be made in China, but it also has headquarters in Munich and California. Oh, and the company’s chief engineer is a Cork man – David Twohig, who left for Byton having worked on the likes of the Nissan Qashqai, Renault Zoe and Alpine A110 at Renault-Nissan.

Byton’s first car, the M-Byte, will be a large SUV-cum-MPV with an enormous 48-inch digital dash (and supplementary touchscreen on the steering wheel). It’s designed from the outset for autonomous driving (Twohig told The Irish Times: “People are spending hours of their day stuck in traffic jams, and Byton is genuinely thinking about how we can give that time back to the driver”) and will of course be electric powered, with a range of up to 550km. Full production is due to start shortly.

Gordon Murray once designed racing cars for Ayrton Senna. And Alain Prost. And Nelson Piquet. And Niki Lauda. He then took that gold-plated genius and designed the 1990s McLaren F1 supercar, a 600hp all-carbon powerhouse that still lays a solid claim to being the single greatest car of all time. Now, he’s back at it designing everything from a modern-day F1 successor with a 700hp Cosworth-built V12 engine, to a tiny three-seater city car, powered by either batteries or a very compact petrol engine, which could be a rival to the Smart ForTwo.

Oh, and the Ox, a cheap-and-cheerful truck for developing nations, which can literally be assembled from a flat-pack. Oh, and he has a light, simple, Mazda MX-5 rival on the drawing boards too. Oh, and an entirely new way of building cars – dubbed iStream – which has a much lower carbon footprint and requires half the usual factory space.

Not all of these cars will make it to production (Murray’s plan, aside from the V12 supercar, is to licence his designs rather than make them himself) but the greatest Formula One engineer since Colin Chapman could yet revolutionise the world’s car industry.

An American start-up, which plans to begin production of its R1T electric pickup truck, and R1S SUV, this year, in a factory once owned by Mitsubishi. Normally, Rivian would be just another faceless start-up in among many, but it could end up being one of the most influential of all, and its probably the electric car maker ‘most likely’ to rise to Tesla-like levels of success. How so? Well, aside from having attractive, appealing vehicle designs, Rivian has attracted investment from Ford (with whom it’s rumoured to be working on an all-electric version of Ford’s huge-selling F-150 pickup) and Amazon (by whom Rivian has been given a contract to build 100,000 electric delivery vans).

Which of the above will become the new Tesla? And which will become the new Tucker? It’s close to being an impossible call. Think of this – back in 1985, a new car, once certainly unheard of by most, became one of Fortune magazine’s outstanding products of the year. Alongside New Coke, in-flight telephones, Air Jordan sneakers and the first medical treatments for Aids, Fortune reckoned that this new car had qualities whose “technological innovation, originality or risk-taking created excitement in 1985”. That car was the Yugo. It’s a lesson of hype versus delivery that every new car start-up should have emblazoned over the office door.