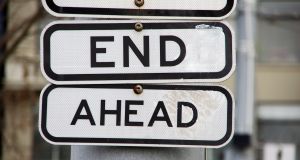 All it took was a 60-year drought to wipe out Nineveh, capital of the great Neo-Assyrian Empire and the largest city in the world until its fall in 612 BC.

At 3pm Irish time today we will learn whether our frail planet and its human cargo must lurch a step closer to being engulfed by a global catastrophe of our own making.

It is time once again for the annual reset of the Doomsday Clock, a timepiece that measures the variety and severity of threats we face due to scientific and technological advances achieved at the hand of humans.

The Doomsday Clock is only a symbol but is a highly potent one, with 12 midnight representing Armageddon and the seconds and minutes beforehand representing the frighteningly little time left to back away from the edge and find ways to remove the self-imposed threats we have created for ourselves.

The Doomsday Clock shows two minutes to midnight, the closest it has been to the apocalypse since 1953 during the early years of the cold war when mutually assured destruction was the only thing keeping nuclear holocaust at bay.

The second and minute hands can be moved forward or backward depending on perceived risk of a global catastrophe and deciding this is in the hands of the Bulletin of the Atomic Scientists’ Science and Security Board who set the clock in motion in 1947 with the hands pointing to seven minutes before midnight. Changes also require consultation with the Bulletin’s Board of Sponsors, which includes 13 Nobel Laureates.

The current setting was agreed in 2018 and there was no movement of the hands in 2019, but we seem to have no shortage of ways to crank up the risk and threaten the current world order so don’t be surprised if we see the hands move us ever closer to midnight.

Nuclear weapons were the only show in town in the early days of the clock and have remained one of the greatest risks to our future on the planet. Even as the former superpowers and their allies scaled back their nuclear arsenals, new nuclear players emerged such as India, Pakistan and North Korea and others including Iran are attempting to build nuclear weapons.

Even a limited exchange in a regional conflict would cause huge damage to large parts of the planet and a full-scale exchange could trigger the mutually assured destruction these weapons originally promised.

As if that wasn’t enough of a danger we now have the deepening climate catastrophe, opening up fresh opportunities to cause harm. It is not just about temperatures, our warming climate has a wide range of impacts, almost all of them thoroughly damaging and likely to trigger profound changes and unrest.

One of the biggest risks is the fact that despite us serving as custodians of planet Earth we have set in motion one of the greatest mass extinctions of diverse species since life first emerged. Warming oceans are changing habitats and as a result forcing marine species to adjust or die. It is causing cold water fish to migrate north in our hemisphere or south in the other but will also alter a species mix that has existed for millions of years. Corals are being bleached clean and the species food webs they supported are being destroyed.

Access to clean water will be a growing concern given the loss of ice from mountain glaciers right around the world. When the glaciers are gone the annual melt of snowfall and older ice will not be sufficient to support demands for drinking water and agricultural irrigation.

The same practice, irrigation, in some regions is also hastening the loss of soil fertility as minerals and salts build up leaving the ground unable to grow food crops. Species loss is also seen in the disappearance of insect species and plants and there are particular concerns for our key pollinators. Bumblebee species are disappearing as are bees and if the trend continues it will damage yields and further reduce food supplies. In effect our climate-changing activities are causing a major reset of many of the planet’s life support systems that help keep us safe and well.

Those who set the Doomsday Clock also look at other risks, for example discoveries being made in the life sciences and technologies that arise as a result. One might think of the capabilities coming out of genetic technologies which have made it possible for us to alter germline cells and so create genetically modified organisms. These same techniques could assist in the production of genetically modified humans.

The past year also shows that what is described as information warfare is a new weapon in the armoury of those who would seek to dismantle democracy around the world. The impact of fake news and alternative facts has already been used to influence elections and this can only increase in the coming years as there is no mechanism to halt its growth.

The Doomsday Clock is important because it forces us to recognise we face a collection of existential threats, all of them crafted by human endeavour, and of a magnitude that could be enough to reconfigure civilisation as we know it. All it took was a 60-year drought to wipe out Nineveh, capital of the great Neo-Assyrian Empire and the largest city in the world until its fall in 612 BC.