Could constellations of mini-satellites prevent the splintering of the internet? 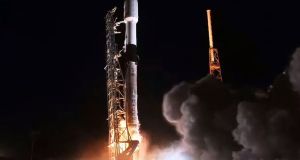 The launch of a Falcon 9 rocket from Cape Canaveral, Florida, on January 6th, 2020. It carried the third batch of 60 Starlink mini-satellites into orbit, part of a plan to build a giant constellation of thousands of spacecraft that will form a global broadband internet system. Photograph: Getty Images

Two weeks ago Elon Musk’s SpaceX launched a further 60 satellites for its Starlink programme to build a global broadband internet infrastructure. To date 182 Starlink satellites are now in low Earth orbit, with a further 60 planned for a launch later this month.

SpaceX plans that the initial system will be fully operational with 4,425 satellites, but has US regulatory approval to deploy up to 12,000. In October 2019, it filed for further approval (yet to be granted) for another 32,000 satellites.

Since Sputnik-1, launched in October 1957 by the former Soviet Union, in total about 8,400 satellites have been launched by various nations. Excluding Starlink there are currently just under 5,000 satellites in orbit – which places the immense scale of the Starlink deployment in context.

Other multinationals have announced global satellite-based internet systems, but none have so far deployed. Amongst others Amazon has its “project Kuiper” with 3,236 satellites, Samsung has announced a 4,600-satellite constellation, and Facebook’s Athena programme has claimed it will have 10 times the capacity planned by Starlink.

SpaceX has come under heavy criticism for the impact which Starlink is already having on terrestrial astronomical observations.

After launch the satellites are initially placed in a relatively low parking orbit for operational testing. They form a “train” which leaves parallel bright streaks of reflected sunlight across the night sky, dramatically impacting astronomical camera exposures.

After testing each satellite is then independently moved into a higher orbit, but still will reflect sunlight. SpaceX has agreed to test whether painting future satellites matte black will reduce light reflection.

The concept of a constellation of low Earth orbit satellites to provision a global communications system is not new. Being able to provide high-quality coverage across the developing world, and in all rural and remote areas, on a global scale could be highly attractive. Of course, such a service would have to be cost competitive.

In the early 1990s Motorola designed its Iridium system with 77 satellites (iridium metal has an atomic number of 77) and full global coverage was eventually achieved by 2002. IONA Technologies, of which I was a co-founder and CEO, provided critical platform technology to Iridium for its three constellation control and management centres.

Iridium was technically successful, but commercially a failure. Instead the concurrent rise of terrestrial 3G mobile networks in the early 2000s proved more commercially attractive to telecommunications operators.

The internet was originally conceived as a global integration which would span numerous smaller networks. Internet pioneers believed humanity would come closer together by breaking down cultural barriers with an accessible uniform resource for the world public.

Concurrent with the Iridium programme, the rise of e-commerce rapidly proved how the internet could also become a global market place for advertising, shopping and services.

The entire high technology sector takes the pervasiveness of the web as axiomatic. But what would happen if jurisdictions operate their own national internets for political and economic reasons?

Last month Russia ran a multi-day test of RuNet to verify that its national online infrastructure can operate independently of the rest of the internet. China’s “Great Firewall” which filters content available elsewhere is well-known.

However, other jurisdictions – for example Egypt, Iran, Myanmar, Saudi Arabia, South Korea, Tunisia, and Vietnam – also control content on their respective national networks. The term “information sovereignty” has been used even in Europe by some politicians who view American online surveillance capitalism with suspicion.

The focus of national controls of the internet has so far been for political and religious reasons, and to stifle dissent. However, it seems a relatively small step from control of content to control of economic activity.

From this summer Russian law will require that all computing devices sold in Russia will have pre-loaded applications from Russian sources. Chinese online companies already have national protections and legal advantages over competitors selling into China from overseas.

It would seem entirely credible that this decade could see the splintering of the internet for national economic reasons (as well as political). The global marketplace and relative pervasiveness of the internet may disappear.

Could the American Starlink system, and its kindred constellations, overcome this?

In principle, absolutely: a global internet in the sky, accessible anywhere on the planet, at low cost and with high bandwidth, provided you have the right kind of device.

While the Iridium phone handset was larger than a brick, the first Starlink devices will be the size of a pizza box. Each will require line of sight to the sky overhead: a roof box should connect your domestic wifi network to any web site on the planet, regardless of any government internet restrictions in your jurisdiction. By the end of the decade we could well see mobile devices being extended to communicate directly with low Earth orbit constellations.

Iridium failed because terrestrial-based 3G mobile networks emerged. It would be ironic that just as content on terrestrial mobile and fixed-line networks becomes strictly protected by multiple national governments, access is achieved by a new generation of low Earth orbit satellite technology.