Irish skincare sector booms by getting back to nature 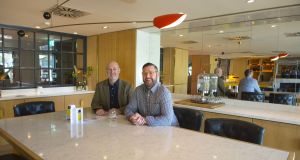 Young Irish companies are using a combination of nature’s bounty and science to develop innovative products for the growing international natural skincare market.

A decade ago the number of Irish skincare companies could be counted on one hand. Today there are more than 30 and about half have been set up within the last five years. What’s particularly interesting about some of them is that they have positioned themselves to become global players from inception and are future-focused, well-capitalised young businesses using science to underpin their products.

The global skincare market is dominated by big names such as Olay, L’Oréal and Nivea. However, there is a healthy interest in natural alternatives as consumers become as conscious of the ingredients in their cosmetics as they are about those in their food. For these buyers, products with parabens, aluminium, solvents, silicates and artificial preservatives, colours or fragrances are an anathema. And this is not just a female thing. Men, and younger men in particular, are increasingly taking care of their skin, hair and beards and many want to do so with natural products.

Market intelligence company Datamonitor estimates that the global skincare market will be worth about €116 billion by 2021. (The global beauty business as a whole is worth an estimated €328 billion). Of this, roughly 30 per cent will be spent on natural products and the worldwide market for natural skincare is growing at an estimated 10 per cent per annum.

Seavite, Green Angel and Voya are among the longest-established names in the natural beauty business here, but they have been joined by a phalanx of newcomers including Pestle & Mortar, Ocean Bloom, AromaBump, Jo Browne, Bia Beauty, BareChic, Modern Botany and NEUÚ. Between them these producers cover the whole spectrum of personal grooming with “free from” and frequently organic products based on natural ingredients such as essential oils, seaweed, flowers and herbs.

While making skincare products is a lifestyle choice for some, companies such as Voya and Green Angel and more recently Modern Botany and NEUÚ, have much bigger ambitions. Green Angel, which employs 15 people, is stocked in more than 600 pharmacies in Ireland and exports to the UK, while Sligo-based Voya employs 45 people and sells its organic face and body products in 38 countries. Modern Botany and NEUÚ may be newbies, but they too are preparing for international growth and both have secured contract manufacturing facilities in Ireland that can be scaled up to cope with demand.

Simon Jackson and John Murray, founders of vegan- and Leaping Bunny- (against animal testing) certified Modern Botany, are aiming to bring simplicity to natural skincare. Their first product is a unisex, multipurpose moisturising oil that can be used on all skin types while also doubling as a nail, beard and hair conditioner.

“Natural cosmetics are in their infancy here and there is a really good opportunity for Ireland to become a world-class centre of excellence, following the best manufacturing practice and sourcing the best natural ingredients from an ethical supply chain,” says Jackson, who has a PhD in pharmacognosy, the study of medicinal drugs obtained from plants and other natural sources. Jackson is no stranger to luxury skincare, having previously founded niche skincare company Dr Jackson’s Natural Products in the UK in 2008. He is also a former entrepreneur in residence in the School of Pharmacy and Pharmaceutical Sciences at Trinity College Dublin.

“With Modern Botany we wanted to create a single skincare product for men and women using evidence-based science,” he continues. “For women we wanted to formulate a natural moisturiser with anti-ageing properties that dries matt so makeup can be applied on top. For men we wanted to offer a straightforward product that was good for the beard, effective in tackling shaving rash and great for the face as part of a daily moisturising routine.”

Modern Botany has just launched its second product, a 100 per cent natural antiperspirant deodorant, using pharma quality ingredients including witch hazel – a natural astringent – and eucalyptus, which has antiseptic and antibacterial properties. At €25 for 100ml it doesn’t come cheap but John Murray says consumers will pay for quality natural products. “There has been a shift in thinking we describe as a move away from synthetics and the ‘chemical generation’ to a generation much more in tune with nature,” he says.

Susan Keating and her co-founder at NEUÚ, Prof JJ Leahy of the University of Limerick, took the lipid chemistry of seaweed as the starting point for their business and have spent the last three years developing it as the key active ingredient for their range. The company’s first group of products, launched in March, is aimed at men and includes a shaving gel, body wash and moisturiser. A range for women will follow later this year.

“The centrepiece of our products is a nutrient-rich seaweed oil produced at the laboratory in the University of Limerick,” Keating says. “Drawing on JJ’s scientific expertise, we have extracted the components in seaweed responsible for moisture retention (hyaluronic and alginic acids) separately from those responsible for protection (lipids). These are then recombined as the unique seaweed oil we use in our products. Seaweed is very calming so it’s a great solution for anyone with redness, rosacea and dryness. Our objective was to develop highly effective natural seaweed- based products that work wonders for the most sensitive and irritated skin types.”

Modern Botany, which is based in Schull in west Cork, will celebrate its third birthday this year and employs six people. The company has been supported by the Clonakilty LEO and is part of Enterprise Ireland’s HPSU programme. Its products are made in Co Mayo, it has plans to launch about five new products a year over the next five years and will be moving into the German market next year, followed by North America in 2020.

However, developing natural products with international reach requires deep pockets. Both Modern Botany and NEUÚ have invested more than €100,000 in their businesses so far and have put a great deal of R&D and money into ensuring the science behind their products is informed by academic rigour.

“Proving our science remains a priority,” says Susan Keating of NEUÚ. “To date we have established the hydration and anti-inflammatory efficacy of our seaweed skincare products through detailed studies and we will continue to invest in this so that consumers have reliable evidence of the benefits and efficacy of NEUÚ products up front. Right now we’re focused on building brand awareness and partnering with the best retail outlets for our products in Ireland and overseas.”