How to manage and innovate at the same time 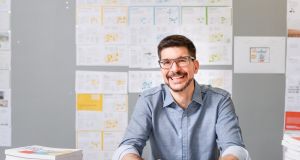 Swiss business theorist Alexander Osterwalder. ““Testing and adapting a business idea until it works is a radically different skill set than managing a business”

With many once powerful business organisations now resting in the corporate graveyard, it is a brave company that views itself as invincible. All the more surprising then that that’s the key word in the title of Alexander Osterwalder’s new book. The Swiss business theorist and inventor of the Business Model Canvas admits that styling the book he is lead author of as The Invincible Company is an act of provocation as much as a marketing ploy.

“No company can truly say that it is forever invincible, but what you can do is constantly reinvent yourself so you have this ‘attitude of day one’ – as Jeff Bezos of Amazon puts it – and you keep it. You need to be aware that you can die and that’s what makes you invincible. When you get complacent, that’s when you are in danger of disappearing,” he tells The Irish Times.

It’s a fate that awaits many, he says, singling out banking and pharma as among the industries in which major shake-outs are likely to occur. On a wider level, Osterwalder says that the days in which competitive advantage came from factors such as quality and superior products and technology are over. What matters now is robust, innovative business models, and ones that are flexible enough to embrace change where required.

“Entrepreneurs and companies should spend a lot more time thinking beyond great technology and products. These two are just given today and they allow you to compete. If you want to win the game you need to think business model patterns. The issue for companies now is how do we build a moat to protect ourselves?” Osterwalder says.

There’s no “one size fits all” here. In a book rich in case studies, there’s a myriad of stories of nimble disrupters and incumbents who have skilfully pivoted to new models.

Take Nintendo. In the early 2000s it no longer had the means to compete on high tech gaming consoles and is profits were falling. It responded by releasing the Wii in 2006, a product with much inferior technology than its competitors. The real story here, however, is a deliberately strategy to shift from costly high tech to low tech to target an underserved market for casual gamers. Manufacturing the Wii thus became much cheaper because it uses off-the-shelf components and it trumps its competitors.

For much of its history Microsoft railed against open source. In 2014, new chief executive Satya Nadella radically ramped up its shift towards an open approach, moving Microsoft’s focus away from proprietary Windows towards operating system agnostic cloud solutions to satisfy enterprise users and developers.

Jump further back in time, meanwhile, and consider Disney, a corporation that changed from the light asset business of movie-making to the heavy asset business of theme parks, enjoying enormous success in the process.

The Covid-19 crisis will be an inflection point for many businesses, Osterwalder says. Those that were weak entering it will struggle to survive. The secret to succeed at the moment is to balance managing the core with continuing to innovative.

“Invincible companies are ones that have a strong execution muscle as well as an innovation muscle. It’s not an either/or it’s an and. The companies that realise this will thrive because they know how to deal with uncertainty and how managing this makes you resilient.”

Osterwalder is best known for his work in developing and exploring business models for start-ups. His Business Model Canvas has been widely adopted as a more useful alternative to traditional business plans.

“Testing and adapting a business idea until it works is a radically different skill set than managing a business. In innovation you are managing a high degree of uncertainty so you need to detect patterns in the data and use that to scale profitably.”

In the book Osterwalder addresses a number of common innovation myths. The first is the notion that the most important part of the innovation journey is to find and execute the perfect idea. It’s not, he says. The real goal should be about turning ideas into value propositions that customers care about and business models that can scale.

The second is that when testing a business idea, solutions will magically appear. Innovation and entrepreneurship are as much art as science, he maintains, and are ultimately about making informed decisions on incomplete and potentially contradictory evidence. Evidence allows you to detect patterns and make informed decisions that are less risky than opinion-based bets.

Rather than making a small number of large bets, he advocates the exact opposite, maintaining that it is impossible to know what is going to work. As ideas get tested, the options can then narrow, allowing for a scaling up of those bets. This metered approach to investment means that the best ideas and the teams with the most promising returns will emerge if you do this systemically over multiple rounds.

He points to statistics from early-stage venture capital investment in the US that indicate that the majority of early stage investments don’t return capital, with around 65 per cent losing money.

While the balance of ventures show some return, only four in a thousand are outliers that return 50 times or more the level of invested capital. Put another way, if you invest seed capital into 250 projects, 162 will fail, 87 will find some success and only one will become a serious growth engine, he says.

“At the beginning of the lifecycle of a company, good ideas and bad ideas are virtually indistinguishable. Everything can look good on paper. How many PowerPoint presentations have we seen by charismatic founders and innovators that didn’t work out. You just don’t know. We need to have multiple ideas and the winners will emerge.

Assessing the business risks for your idea

To test a big business idea Ostwerwalder recommends that you break it down into smaller chunks of testable hypotheses, covering the following three forms of risk:

Feasibility risk – The risk is that a business can’t get access to key resources such as technology or intellectual property brand, and can’t develop capabilities to perform key activities or can’t find key partners to build and scale the value proposition.

Desirability risk – the risk is that the market a business is targeting is too small, and that too few people want the value proposition, or that the company can’t reach, acquire or retain targeted customers.

Viability risk – the risk is that a business can’t generate successful revenue streams, that customers are unwilling to pay enough, or that the costs are too high to make a sustainable profit.