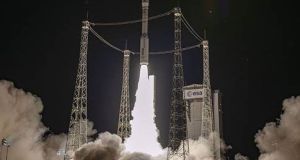 AI technology developed by Ubotica has been deployed onboard the satellite which blasted off on Thursday morning.

An artificial intelligence (AI) solution developed in Ireland has been included on board a satellite that blasted off into space from French Guiana early this morning.

The PhiSat-1 is the first European satellite carrying out an experiment to demonstrate how on-board deep-learning technology can speed up the rate at which observation data is processed and transmitted to Earth.

An AI solution developed by Dublin-headquartered robotics start-up Ubotica Technologies that consists of a printed circuit board containing computer chips and custom software forms an integral part of the satellite.

The technology will allow decisions to be made on board more quickly than on the ground and will help reduce the data load sent back to Earth.

The tech includes an AI chip that was originally developed by Irish technology company Movidius, which was acquired by Intel in a multimillion euro deal in 2016.

The Intel Movidius Myriad 2 chip allows for high-performance, low-power vision processing, and can be pre-trained with data to recognise particular features and patterns, or perform in-depth 3D sensing.

The key task being demonstrated on this space mission is that of automatic cloud detection on images captured by the satellite’s advanced hyperspectral sensor.

Enterprise Ireland-backed Ubotica, founded in 2016, is based at Dublin City University’s Alpha centre. It employs 15 people.

Aubrey Dunne, the company’s co-founder and vice-president of engineering, said the company was excited to be a key part of the PhiSat-1 mission.

“This mission is the culmination of two years of effort by Ubotica, in collaboration with the European Space Agency (ESA), to characterise and prepare the Myriad 2 device for deployment in space,” he said.

“Myriad’s low-power, high-performance compute is ideally suited to satellite applications, and Ubotica’s AI technology harnesses this to effectively address the opportunities that we are seeing emerge,” Mr Dunne added.

In preparation for this mission, Ubotica previously worked with the ESA to carry out tests at the world famous Cern centre in Switzerland to see if its technology would be suitable for use in space. The centre is home to the €4 billion Hadron Collider, the world’s largest and most powerful particle accelerator, which was used to help discover the Higgs Boson.

The tests for the Myriad 2 AI chip used Cern’s second largest particle accelerator, the Super Proton Synchrotron, to blast the chip with radiation to see how it would cope under adverse conditions.

Results indicated the device was robust enough to cope. Ubotica subsequently developed software called the CVAI Toolkit to enable the Myriad 2 device to interact with the main computer on-board PhiSat-1, so that AI inference can be performed on satellite images acquired by the main satellite computer. Ubotica has also provided the AI engine that was integrated into the satellite.

“The Myriad 2 chip, which was developed with Irish expertise at Movidius and brought to space by Ubotica, an AI start-up, is a prime example of Ireland’s innovation power in space,” said Josef Aschbacher, director of ESA’s earth observation programmes.

The launch of PhiSat-1 is the first in several programmes in which Ubotica is working with leading players in the European space industry to develop AI applications.

While it might seem at first glance a little unusual that Irish companies are working with the space agency, it is anything but. Since 2000, more than 80 Irish firms, including the likes of InnaLabs, Arralis, Pilot Photonics, Radisens Diagnostics and Skytek, have secured ESA contracts exceeding €80 million in value.