AltCamp getting to grips with camping; WePLAY and healthy children; limb rehab 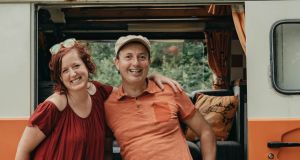 AltCamp: Ken Baird spent more than 10 years in Australia before coming back to Ireland with his partner Órla O’Regan, buying a camper van and spending time reacquainting himself with the Irish countryside.

Alternative camping sites, getting kids physically active and stroke rehabilitation training are three of the newly minted businesses to graduate from the latest social enterprise incubator run by the Irish Social Business Campus.

Communities pulling together for the greater good was one of the positive outcomes of the Covid-19 lockdown and it’s exactly this sort of altruism that drives most social entrepreneurs. Their aim is to make a difference in people’s lives and, for most of them, making money plays second fiddle to social impact.

As a result, they often struggle to fit into the confines of the conventional start-up landscape. Since 2016, however, the Irish Social Business Campus has catered specifically for their needs with a dedicated incubator that helps them to develop their ideas and put them on a commercial footing.

Ken Baird is one of nine entrepreneurs who took part in this year’s incubator. He is the founder of AltCamp and describes his business as, “a socially positive online platform that connects people who want to camp with landowners who want to rent camping spaces”.

Baird has set two objectives for his business. The first is to introduce more people to the health benefits of being outdoors. The second is to create an income stream for small rural communities located off the main tourist tracks.

Individual landowners will determine the rents, but rates are likely to start from about €10 a night for a basic pitch. Aspiring Bear Grylls can filter their choices by location and whether or not they need gear supplied. AltCamp also covers pitches for camper vans and sites that offer different types of under canvas experiences such as yurts and glamping.

Baird is a graphic designer who spent over a decade working in Australia before coming back to Ireland with his partner Órla O’Regan, buying a camper van and spending time reacquainting himself with the Irish countryside.

“The benefits of camping are well documented and include fresh air, exercise, less stress and socialisation so it’s to be encouraged and the scenery around Ireland is so beautiful that it should be enjoyed by more people,” he says. “We also want to promote rural tourism and give people living in more remote areas the opportunity to earn money from renting space to campers.”

Baird is in the throes of building his company’s website and expects beta testing to begin shortly. He intends spending the winter months refining his product and AltCamp will go live early in 2021.

The business will make its money by charging a booking fee which will be shared by the guest and host.

Baird has continued working while setting up his business and has bootstrapped his start-up at about €5,000. His next step is to seek investment of up to €100,000 to take things to the next stage and to fund the development of key add-ons such as an app version of the platform.

Clare McSweeney is an athlete, sports coach, former wellbeing specialist with Apple and founder of WePLAY. What gets her up in the mornings is the desire to make physical exercise attractive to young children through structured play.

“Only 17 per cent of Irish children are active enough to be considered healthy and our mission is give every child a positive, quality and enjoyable sport and physical activity experience,” she says.

Over the last three years, McSweeney has put more than 2,000 children through her WePLAY programme in school settings. “I wanted to get into the trenches and understand the needs and experiences of kids around existing physical activity,” she says. “From this came a series of modules designed to promote their physical literacy development and wellbeing through educational videos and games.”

McSweeney had always planned to launch a digital version of her programme, but the arrival of Covid-19 accelerated its roll-out, and she also decided to offer it free to schools and families for an extended period. Ultimately, schools and parents will pay to use the programmes via a SaaS subscription.

McSweeney is a graduate in athletic therapy and training from DCU and she left Apple to set up WePLAY because she believes it is crucial to introduce children to exercise and wellbeing routines early on.

“From working with adults I know how hard it is to get them to change their habits, especially around exercise,” she says. “This is why it is so important to get to children when they’re young and to engage them in a fun way to build a physical activity habit that will stay with them for life.”

McSweeney estimates she has invested a great deal of sweat equity and about €20,000 in hard cash in her business and, while she loves what she’s doing, it hasn’t been plain sailing.

“I know exactly what I want to achieve but it’s been a challenge to find a realistic revenue model given all the constraints around spending on education,” she says. “A pilot of an expanded WePLAY programme, including gamification and animation elements, is launching shortly in the US market and the results of this will influence the future direction of the company and our investment needs.”

Susan Forde is the driving force behind Slánú Stroke Rehab, a community-based training programme aimed at those recovering from a stroke and targeting upper limb rehabilitation.

Forde is an occupational therapist and has seen the shortcomings of the current rehab process at first hand. She says the big issue is that stroke survivors only have occasional access to rehabilitation whereas what they need is intensive therapy if they are to regain good function in the hand and arm affected by the stroke.

Restoring movement is vital as it has a huge impact on independence and quality of life. Slánú teaches people how to retrain their hand and arm and then coaches them, much like a personal trainer, so they stick with their daily exercise routine over a period of up to eight months.

“What we’re offering is highly innovative and modelled on a proven service developed by the University of London and Prof Nick Ward of the National Hospital for Neurology and Neurosurgery,” says Forde. “It includes technologies such as video gaming, VR and 3D design and printing of functional hand splints for our clients.”

Before Covid Forde and her team of two visited people in their homes. Since the lockdown everything has had to move online and Forde says she is now reviewing the delivery model to see how a hybrid approach to the training might work.

This would also have implications for the company’s cost base and pricing. When Slánú is fully up and running it will cater for about 50 clients a year.