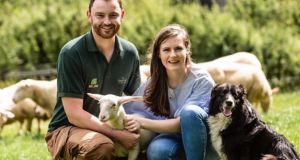 George and Hanna Finlay on their farm in the Glen of Imaal in Co Wicklow. Photograph: Ballyhubbock Farm

George and Hanna Finlay are a good team. He knows all about sheep, she’s a scientist who used to work for the Kerry Group. Now they’ve pooled their expertise to create the artisan food producer Ballyhubbock Farm, which makes sheep’s milk ice cream and halloumi cheese.

The couple’s business is based in the Glen of Imaal in Co Wicklow, where they hand-make their products in small batches. They began the process of setting up their business in 2017 but it took two years to pull everything together as there was livestock involved and they had to wait until their East Friesian dairy sheep produced lambs before they could start developing their products. There was also the small matter of training the sheep to be milked. They currently have 60 ewes and are looking at tripling this number to meet demand.

“Our products are particularly nutritious as sheep’s milk is naturally creamier, sweeter and packed with more nutrients than cow’s milk,” George Finlay says. “The products are also suitable for those with a digestive intolerance to cow’s milk, while halloumi is a delicious alternative to meat products for vegetarians. Most of the halloumi available here is imported and a mixture of cow’s and goat’s milk. We wanted to offer a 100 per cent sheep’s milk version and to produce an import substitution. Because there is no maturation process with halloumi we could get it to market quickly and it also has a good shelf life.”

The couple have spent close to €100,000 on their start-up between livestock costs and building their production facilities. This was largely self-financed. Finlay’s parents rowed in to provide whatever support they could from the family farm and his mother, Olive, helps make the ice cream, which comes in unusual flavours including chocolate ganache and raspberry crumble.

“The thing we’ve needed most when starting the business was patience, because the whole approval process takes ages and there’s nothing you can do to speed it up,” Hanna Finlay says. “Our business is a very full-on commitment and we work long days, seven days a week, but we don’t mind as we’re passionate about promoting Irish food and creating a sustainable business from our relatively small family farm. Initially when Covid started and the restaurants closed we were worried because we had just lined up new business, but then we got overrun with retail requests. The phone never stopped ringing during the lockdown and we were working flat out because we didn’t want to disappoint anyone.”

With the ice cream and halloumi now launched, the couple have turned their attention to adding new products and a ricotta cheese is next with others to come. Their products get to market via a combination of own and distributor delivery and pitching the pricing just right has been a challenge. “The products are expensive to make and we won’t be selling in huge volumes so it’s been a balancing act between giving us a margin and making the cost acceptable for consumers,” George Finlay says.

Not being able to do in-store tastings due to the pandemic has been a blow for the couple’s marketing efforts, not least because the proof is in the eating for those who are not familiar with sheep dairy.

“People need to taste the product for themselves and learn about its benefits and we had various things lined up to promote the products that have had to go on hold,” Hanna Finlay says. “For now, we’re concentrating on marketing online and through social media. We have ambitions for our products to travel further afield and to continue putting Irish cheesemakers on the map in other countries. Irish dairy is just so excellent it would be a shame not to share it.”