From Colgate lasagne to Crystal Pepsi: visit the Museum of Failure

Swedish museum has taken the most abject commercial failures and put them on show – we can all learn a lesson from Zune, Apple Pippin, TwitterPeek and Nokia N-Gage 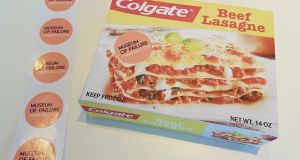 The Colgate lasagne TV dinner: a brush with commercial disaster

Ah, nostalgia. Remember back when we were all listening to our Zunes, drinking a Crystal Pepsi, munching a McDonald’s Arch Deluxe, smoking our RJ Reynolds Premier, and playing a series of deeply inadequate games on the Apple Pippin?

Of course not. These are products that swan-dived from the highest board; failures so legendary they have their own appendix in business-school textbooks. They’re proof that even with a multimillion-dollar marketing budget, you still can’t buy someone who’ll see that the emperor’s new soft drink tastes like cat piss.

Now, a new museum in Helsingborg, Sweden is devoting itself to creating a quite literal catalogue of these errors. But far from pointing and laughing, Dr Samuel West, the organisational psychologist behind it, sees the Museum of Failure as something salutary: “Innovation requires failure. Learning is the only process that turns failure into success.”

In that sense, his is a museum about psychological flaws made visible. Bic’s “For Her” pens, for instance (elevator pitch: “A range of pens with floral patterns on them”), took a useful idea (“market segmentation”) and over-extended it to an embarrassing degree.

Often, the mistake is in taking two useful things to create a useless thing. The jaw-droppingly dismal TwitterPeek took 2009’s emerging Twitter-mania, and a thirst for handhelds such as the Blackberry, and created a machine that could do nothing but look at Twitter. Despite its monomania, it still couldn’t display an entire Tweet on a single screen.

The CueCat sprang from a similar impulse to solve a problem without asking whether one existed. Are you exhausted by typing the web addresses of companies you read about in magazines into your web browser? No? Then perhaps a barcode scanner you attach to your PC might not be a great idea.

Some are about the hubris of product engineers. The Apple Newton’s handwriting recognition was notoriously faulty, while the Nokia N-Gage was a masterpiece of bad design. You had to disassemble it to change games, there weren’t many games, then you had to crack it open like a taco to use the phone itself.

While most exhibits speak of over-innovation, a few memorialise the failure to innovate. Blockbuster (represented by a DVD box) and Kodak (a clunky first-gen digital camera) never quite swam their way out of the coming flood of new tech.

Of course, not everyone is quite so keen to do a self-audit on their psychological flaws. Colgate refused to co-operate with West’s interest in the Colgate lasagne TV dinner. So West had to use his artistic side to reconstruct the box himself.