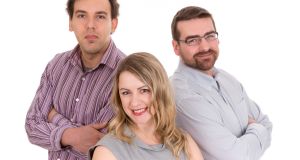 Pavels Kartasevs (L) co-founded Bioxplor with Mark Rogers and Anna O’Leary at the start of this year. 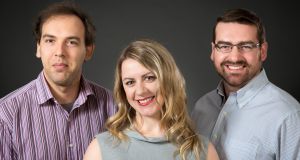 The average cost of developing a successful new drug is about $2.6 billion. That’s an increase of 145 per cent over the last 15 years and the figure is continuing to rise, not least because the current rate of attrition on phase-one drug developments is over 95 per cent. One of the main reasons why is the low reproducibility of scientific experiments. Now life sciences start-up Bioxplor has stepped in with a solution. It is developing an artificial intelligence and Big Data-powered virtual laboratory platform than can help scientists improve the reproduction of experiments with knock-on cost benefits for new drug development.

“We could see how the costs of drug discovery were ramping up as well as the challenges facing scientists in reproducing experiments. Last year, the leading scientific journal Nature revealed that 70 per cent of scientists have not been able to reproduce another’s experiments. This problem has now been dubbed the ‘reproducibility crisis’, explains Mark Rogers who co-founded Bioxplor with Pavels Kartasevs and Anna O’Leary in January 2017.

“We also recognised that scientists today have to use multiple platforms and websites to research experiments, order products and services and access analysis tools and databases. It was also becoming clear that there was a tsunami of biological data becoming available and this revealed an opportunity for Bioxplor to use Big Data, artificial intelligence and digital technology to disrupt the market,” Rogers says.

The company’s virtual lab is created from Big Data sets of biological information and this will be used to create three different services: a metasearch platform, a bioinformatics cloud-computing platform and an artificial intelligence powered biomarker and drug discovery programme.

“Our metasearch platform helps scientists find their way around millions of data points easily,” Rogers says. “It has aggregated material from published research experiments including images, graphs and tables as well as patent and clinical trial information and we can give them access to all of it at the touch of a button.

“Our discovery cloud combines data on drugs, pathways and sequencing information on genes and proteins and allows users to perform powerful data mining and analysis directly in the cloud by securely uploading their own datasets. Thirdly, we combine the structured information from our discovery cloud together with the treasure trove of information from our metasearch platform for artificial intelligence-assisted predictions in biomarker and drug discovery.”

Bioxplor’s services are aimed at academics, biotech and pharma companies and its initial target market is western Europe with North America to follow. The investment to date has been in the order of €200,000 from personal resources and support from Enterprise Ireland’s international competitive start fund. The company employs four.

The platform will have a private beta launch later this year with an enterprise version and discovery cloud to follow in early 2018. The products will be offered as a science-as-a-service and customers will pay a licence fee and a fee per use.

Rogers has a background in molecular biotechnology and biomedical research combined with over a decade of commercial experience in life science tools, services and drug development. Kartasevs is a software engineer with a specialisation in bioinformatics and experience in high-performance computing, data mining and analysis. O’Leary studied economics and started her career with RBS Global markets in the US before gaining management experience in the corporate catering, contract services and life sciences sectors.

“We are taking a uniquely data-centric approach to our business and each of our models intrinsically adds value to the others and supports the current and future workflow of scientists,” Rogers says. “Today, there is no single platform where scientists can browse through artificial intelligence-optimised experimental images and biological information in an efficient manner, while also having an integrated community forum, a marketplace and a cloud-computing platform for interactions. Bioxplor fills that gap.”