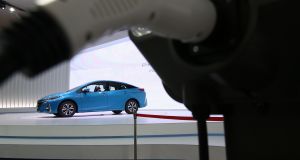 The latest Toyota Prius: Magnets drive electrical motors that power everything from kitchen blenders to lawnmowers to hybrid electric cars.

Magnets. You may not have thought much about them since playing with the traditional horseshoe-shaped variety as a child, but they are all around.

Magnets underpin the hard disks we use to store digital information; they are a key component of wind turbines and they drive electrical motors that power everything from kitchen blenders to lawnmowers to hybrid electric cars.

Now a group of scientists has developed a systemic approach to speed up the discovery of new and potentially useful magnetic materials.

The key is to find magnetic materials that suit particular applications, says Prof Stefano Sanvito from Trinity College Dublin’s department of physics, who is lead author on the new study published in Science Advances.

“We know of about 2,000 different magnets, many since ancient times, but only about 10-30 of those are used in large volumes,” he says. “To be useful in an everyday application, a magnetic material needs to tick particular boxes.”

Those boxes include being able to function at a particular temperature range – whether that is in your laptop computer or a hybrid electric car – and in some cases being resistant to corrosion.

“When you place these constraints on magnetic materials, it knocks a lot of them out of practical use,” explains Sanvito, a principal investigator at the Science Foundation Ireland-funded Amber centre and the director of Crann.

“If you look among the ones that survive those constraints, a few of them have been known for really ancient times. So the discovery of new ones you can really use is really rare.”

Sanvito and colleagues at Trinity and Duke University have been working to bump up the speed of discovery. “In the pharmaceutical industry, people are looking to discover new drugs with a systemic approach – we are taking a similar route for new magnetic materials,” he explains.

The group built a virtual database of about 300,000 hypothetical materials from one chemical class that could be magnetic. Then they used computational analysis to find the ones with a high likelihood of being made and remaining magnetic under particular constraints.

This virtual mining and forecasting is more time- and cost-efficient than a solely lab-based approach, explains Sanvito. “Suppose there are 50 magnetic materials in that group of 300,000 hypothetical ones, then going into the lab and making and testing them will take a really long time, plus some of them can’t even be made. Instead, using the computational approach first means you can narrow down the options quickly and then you go into the lab to make them,” he says. “Basically it is really like finding a needle in a haystack.”

Their approach has already identified about 20 new potentially useful magnetic materials in the database and some have been made in the lab, notes Sanvito. “One is a cobalt-manganese-titanium compound that could have potential uses in electronic magnetic devices,” he says. “Another one we made [a manganese-platinum-palladium compound] is a little peculiar, I’m not sure yet where it may have an application, but it’s an example of where as a human scientist I don’t think I would have intuitively thought that this material would be successful in the selection process, but the computer uncovered it.”

The researchers are continuing to screen the database for more new magnetic materials, and Sanvito is using the same kind of workflow to look for other types of materials too. They include thin materials for use in renewable energy harvesting, ceramics for the aerospace industry and non-corrosive alloys for electronics.

“That’s the beauty of this approach,” he says. “You can use it for applications that have got nothing to do with each other, it’s about getting the useful information.”