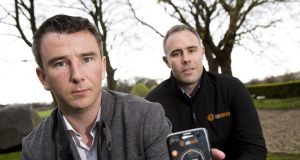 The founders of AimSteady, John Daly and John Aherne, have the 61 million handgun owners in the US firmly their sights.

The former Army colleagues joined forces last year to develop a technology-driven training aid that helps those shooting handguns overcome the inaccuracy caused by recoil anticipation. During the product’s validation tests, those using AimSteady improved their accuracy by 70 per cent over a two-day period compared with those who underwent the same training without it.

Top-class shooters barely move when firing, and the challenge for most handgun users is to reach a point of minimal movement

The device is an unobtrusive ring made from durable plastic and can be worn on any finger. It is linked to a smartphone app, which in turn is linked to the shooter’s ear protection. When a shot is taken the shooter is given real-time feedback in the form of an audible tone that tells them if they have flinched too much in anticipation of the recoil. Top-class shooters barely move when firing, and the challenge for most handgun users is to reach a point of minimal movement. Those using AimSteady set their own movement goal and work towards achieving it.

“It was clear during our time spent training people in handgun marksmanship that anticipating the recoil was the main cause of poor results. This is what makes the handgun the hardest of all small arms weapons to fire,” Daly says. “But by constantly being made aware of the recoil, the firer’s brain is conditioned at a much quicker rate than normal. It is essentially a brain hack. It takes an estimated 10,000 rounds for someone to overcome the effects of recoil anticipation and most people don’t have the time or ammunition to do this.

“AimSteady dramatically cuts down the time it takes to become a competent shot. It works for all level of firers, from beginners to those who shoot for recreation or in competitions. Our device provides feedback on every shot without the firer having to look away from the gun sights. This makes it much more effective than anything else available on the market. Our product also intersects two major growth markets: wearables and gun accessories.”

Daly and Aherne met when they joined the Army at the same time in 2000. They were buddied during their 21-month training period and while they ended up in different units, they stayed in touch and both became involved in training soldiers to shoot handguns. John Daly trained multiple teams for competitions and John Aherne spent over three years with the elite Army Rangers.

Daly, who is on a career break from the Army, has a background in electronic and computer engineering and a master’s in communications technology management. John Aherne, who left the forces in 2015, has since developed a new career in retail and hospitality management.

“When I was training teams I was constantly searching for a product that would help people get over recoil anticipation. There were some basic tools available but they were ineffective as they only provided feedback on one shot during a practice session and they were not suitable for practices involving time limits where firers are given maybe 10 rounds and two minutes in which to fire them,” Daly says.

“Then one day when I was watching a Ted talk on technology to measure movement, something clicked for me and the idea for the device began to take shape. I tapped into a network of ex-Army colleagues who shared their advice and experience and subsequently applied for a patent on the idea.”

Handguns are tricky to fire as the weapon is held out in front of the shooter with no physical support from the body. “When the gun recoils it’s like someone throwing a punch and you have to be able to take it without blinking. It takes a great deal of training to get a handgun under control,” says Aherne.

“Once someone using AimSteady has finished shooting, they can review their performance on their phone, and this information can be used to make adjustments to their technique or to highlight lapses in concentration,” he adds. “Feedback includes total number of shots, total time taken, time between shots and errors in movement. Firers can save their results to track their performance over time and we have also included features such as challenges for people to try. They can also create their own challenges. This is an important feature because a firer’s degree of flinch will increase when movement and time pressure are introduced. The app also has training tips, so the firer always has a trainer in their pocket.”

AimSteady was set up in January 2016. To get the ball rolling the company used an Enterprise Ireland innovation voucher in conjunction with University College Cork to get help developing the app and its unique feedback feature. AimSteady, which now employs four, is part of the NDRC’s Catalyser accelerator for technology and deep know-how start-ups with global market potential. The business has received funding of €100,000 from the NDRC and the cofounders are in the process of raising €500,000 to underpin manufacturing and product launch costs.

The device, which is nearing its final iteration, is due to launch this October. It will retail at $150 (€142) and the company’s first target is those who shoot competitively and spend regularly on gun accessories. “We have set ourselves quite an aggressive timeline, but we believe we can achieve it,” Daly says. “We will sell directly to independent gun stores and online initially, and expand into major retail chains in year two.”

During their participation in the Catalyser accelerator, the founders have worked on honing their business plan and Daly says this has kept them focused on managing their cash flow and prioritising their goals.

Their next step is to finalise the manufacturing. At the moment, however, the jury is out on where the product will be made.

The two locations in contention are the US and China and the fact that the company’s first market is North America may play a part in the final decision. Once AimSteady gains a foothold in the US, the company will be turning its attention to India, where recreational shooting is a fast-growing pursuit. In worldwide terms, the founders estimate their total addressable market for individual buyers at around 112 million people.

Initially, the device will be sold to private buyers, but the founders are already thinking ahead to a second product. Daly says an AimSteady platform that could support multiple shooters is the next step. This would open up huge potential markets for the company with police forces and the military worldwide.