Energy-generating drones get clearance for €3m take-off in Mayo 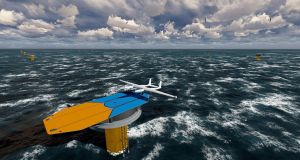 Co Mayo was recommended as a suitable location for the test site by Ampyx, which is a developer of airborne wind energy systems 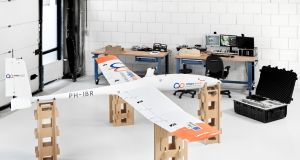 Energy giant E.ON is to invest €3 million in a test site in Co Mayo to aid the commercialisation of autonomous flying drones to produce electricity

The German utility, which has also entered into an agreement with Dutch firm Ampyx Power to be the first user of the demonstration site, said construction of the facility opened up possibilities for collaboration with a range of companies pioneering airborne wind power generation technology.

E.ON is an early adopter of flying drones for electricity generation. Last December it invested £5 million (€5.9 million) in Scottish airborne wind energy developer Kite Power Systems (KPS), which is behind plans to create a kite-driven power station near Stranraer.

Airborne wind technology harvests energy by using a fixed wing or sail comparable to kite-surfing in altitudes up to 450 metres. The technology has the potential to transform the global offshore wind generation market as airborne wind devices are cheaper to manufacture and easier to maintain than conventional wind turbines. They can also be deployed in deeper waters and onshore.

E.ON said Ireland was an ideal location for the test site, partly due to meteorological conditions but also due to the support it had received from the authorities.

“The wind in Ireland is the best,” said Markus Nitschke, a spokesman for E.ON. “We also feel there is a good spirit in the country to make this work out. Even this week I read a positive article on airborne wind energy in The Irish Times, which I thought was a great coincidence and evidence of how it is seen as a great future technology.”

Co Mayo was recommended as a suitable location for the test site by Ampyx, which is a developer of airborne wind energy systems.

Ampyx, which was founded in 2009, has raised more than €4 million from more than 400 investors through a series of crowdfunding campaigns to build a final prototype aircraft, ahead of starting full production of a certified commercial 2MW system.

The company has held approvals from airspace authorities to operate its prototypes since 2010. It is currently in the process of raising a further €2 million from a new crowdfunding campaign, having previously built three generations of prototypes using capital from European innovation grants.

While testing has previously taken place in the Netherlands and Australia, Ampyx said it always had Ireland in mind as the location to try out its final prototype.

The firm realised Co Mayo was a possible base for a test site in 2015 when it attended a drone summit in Westport.

“Mayo was recommended to us because of its low aerospace activity and the fact that it has plenty of wind,” said Pim Breukelman, Ampyx’s commercial director.

“Apart from the physical circumstances that we needed from a test site, we are very encouraged by the ‘can-do’ mentality of the people we’ve met so far. Of course we are still in early stages of development and will be working with the relevant planning authorities, but with open community engagement we are confident that Mayo will be hosting the first of its kind demonstration centre for Airborne Wind Energy technologies.”