A new battery cell prototype may be the best chance tech has at creating faster, safer and longer-lasting rechargeable battery power 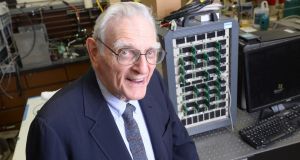 ‘Game-changer’ is an overused term in tech. But the development of a “low-cost all-solid-state battery that is noncombustible and has a long cycle with a high volumetric energy density and fast rates of charge and discharge,” is legitimately worthy of such a hackneyed phrase.

What makes this breakthrough (sorry I couldn’t help it) even sweeter is that the research team responsible was led by Prof John Goodenough of the University of Texas in Austin.

Now in his 94th year, Goodenough is no stranger to innovation in this field. In 1980, at the tender age of 57, he coinvented the lithium-ion battery, which shrank power into the tiny packages we are still familiar with 60 years on. Since the energy crisis in the 1970s, he has maintained an almost militant devotion to the defeat of pollution, principally caused by humanity’s over-dependence on petroleum and fossil fuels, leading him to focus on green science for most of his career.

As the lithium-based storage provider became increasingly seen as dangerous, expensive and inadequate for the growing power needs of new generations, Goodenough searched for a solution through the development of safer, more solid batteries that were both low cost and lightweight. This was no easy task.

Then he stumbled upon the work of Portuguese physicist, Maria Helena Braga, who had developed a kind of glass that replaces liquid electrolytes inside batteries. This, it transpired, was the missing part in Goodenough’s thesis.

“I’m old enough to know you can’t close your mind to new ideas,” he says. “You have to test out every possibility if you want something new.” After two years of collaboration with Braga, Goodenough outlined the key elements which make their battery design novel.

In a recent paper published by the journal Energy & Environmental Science, he described its significance in reference to existing electric car innovation: “Cost, safety, energy density, rates of charge and discharge and cycle life are critical for battery-driven cars to be more widely adopted.

“We believe our discovery solves many of the problems that are inherent in today’s batteries.”

This newest offering – a low-cost, all-solid-state battery that is noncombustible and has a long cycle life (battery life) with a high volumetric energy density and fast rates of charge and discharge – was completed in no small part with the contribution of now senior research fellow at UT, Maria Helena Braga.

“It is safe, has very high energy density and it’s cheap to make,” she says. “We wanted to make a safe battery with a glass electrolyte and by trying certain approaches we found that we could make a new cell architecture.

“It is a prototype but we are very optimistic that it can be commercialised soon. It does not depend on us anymore but on the industries that license.”

The research team have demonstrated how their new battery cells have more than three times the energy density of modern lithium-ion batteries. In addition, no root-like dendrites form causing it to short-circuit – one of the biggest flaws of traditional lithium batteries. “No short circuits can take place in our prototype,” says Braga. “The electrolyte is not flammable, therefore no explosions or fires are possible.”

The materials required are widely available and inexpensive. Any that aren’t, are cheap to synthesize and environmentally friendly.

Tech is fast becoming on par with the fashion industry for its reputation for ageism. From the 22-year-old Mark Zuckerburg becoming chief executive of Facebook, to the more recent news of 12-year-old inventor Shubham Banerjee securing venture-capital funds from Intel to start his own company, the idea that innovation and youth are joined at the hip isn’t going away. While it may be a fun yarn to spin, it isn’t true.

According to an Information Technology and Innovation Foundation study from 2016, inventors “peak in their late 40s and tend to be highly productive in the last half of their careers”.

Goodenough’s leading role in this tech innovation is a shining example of this. “I do not respect Prof Goodenough because he is 94 years old,” stresses Braga. “There are numerous other, more important reasons to respect him: his broad understanding of the complex fields of physics and chemistry, how he welcomes new ideas, his mental process during any scientific discussion: how he grabs life.”

Most importantly is the practical scientific learning Braga has gained under Goodenough’s tutelage. “He may have taught me valuable life lessons about how we can still be active players in the future, but from a scientific point of view, I have learnt so much about batteries and magnetism.”

The two are currently filing several patents and plan to work with commercial battery manufacturers in applying their new power storage approach to electric vehicles and energy storage devices.