Cutting the pain of admin for personal trainers 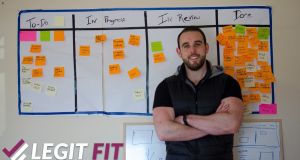 Legit Fit co-founder Ryan O’Neill: “We think our timing is good because there is an influx of people into the fitness area.”

Cork-based Ryan O’Neill is the co-founder of Legit Fit, a business management platform aimed at independent fitness professionals. The multifunctional portal covers areas such as billing, payments and client messaging and O’Neill estimates that Legit Fit can save practitioners more than 200 hours on administration a year.

“The online and mobile app allows health and fitness professionals to increase their earnings by up to €10,000 a year primarily by reducing administration and cancellation costs while it also streamlines the client’s fitness experience as they can book, pay and track their progress online,” O’Neill says.

O’Neill says Legit Fit will develop in two phases. The first will be as a business support for trainers. The second will be to develop the platform into a broader fitness marketplace where those joining the fitness community can announce their arrival and build their profile, while established professionals can use it to fill gaps in their week and attract new clients.

“We think our timing is good because there is an influx of people into the fitness area and more and more of them are becoming self-employed,” he says. “These independent professionals running their own mini-businesses – often from within much bigger commercial operations – are our target market.”

O’Neill studied biological and chemical science at UCC and was employed as a lab analyst in the pharmaceuticals sector when he realised that this was not the career he wanted long-term. He had always been interested in fitness and decided to study for a professional qualification in personal training.

“While training for my certificate, I began to focus on how I could make money as a personal trainer and I could quickly see the challenges that every self-employed fitness professional faces between juggling clients and running a business,” O’Neill says. “At this point I decided to leave my job and go back to college and do an MSc in marketing and management. At the same time I got a place on UCC’s Ignite graduate business innovation programme and was fortunate in being able to do the two side by side.

“It was around then that I started working seriously on the idea that would eventually become Legit Fit. Initially, I thought it would be like a TripAdvisor for fitness, but the challenges of trying to monetise that without a very big marketing budget changed the model. We did a pivot and focused on adding value for trainers instead.”

O’Neill’s co-founders at Legit Fit are Gearoid Collins, Ian O’Sullivan and Lucas Sacramento and the company was set up towards the end of 2017. The business now employs eight people between full- and part-time staff. The beta product was released last October and the platform will have its full commercial launch next month.

Professionals and clients can sign up to the platform for free and this will give trainers access to a certain amount of functionality. However, the company will make its money by charging trainers €50 a month if they want to be able to use all of the platform’s resources.

The company is in the process of consolidating its base in Cork, with 30 trainers already signed up for when the platform goes live. It will then focus on the greater Irish and UK markets and on the United Arab Emirates, where O’Neill has family connections.

“Health and fitness has really exploded there in the last five years and the predominant model is independent trainers, which is a perfect fit for us. Given the much higher disposable incomes there we will also be able to charge more,” he says.

O’Neill estimates start-up costs in hard cash at just under €90,000 and the value of the unpaid man hours that have gone into the project at another €150,000. The project has been funded through personal and private investment and support from Enterprise Ireland and South Cork Local Enterprise Office .