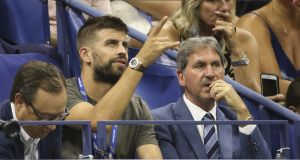 Bernie Ecclestone laughed and slid a piece of paper across the desk.

On it was written “2 billion”, the price the motor racing impresario wanted for Formula One, double what he was being offered.

Anything less would be a waste of everyone’s time, Ecclestone said to prospective buyer Donald Mackenzie, co-chairman of CVC Capital Partners.

That was in 2006. Ten years later, it was Mackenzie in the Ecclestone role, selling F1 to Liberty Media in a deal that turned CVC’s $2 billion (€1.75 billion) into $8 billion.

During its time in charge of F1, CVC are thought to have earned up to $14 billion in fees, share sales and dividends, a return of more than 300 per cent. No surprise then that CVC has a taste for sports investments and in December 2018, the same company made another big bet, paying more than £200 million (€230 million) for a 27 per cent stake in Premiership Rugby, the first-division league of English club rugby union.

Theirs is the definitive story of sport’s relationship with private equity, and it poses tough questions for both sides.

The next 10 years will see many sports governing bodies fight for relevance against the digitised entertainment industry of Netflix, gaming, Facebook and YouTube. This battle for attention won’t come cheap, and they will need private investment and expertise.

But there’s a caveat for the investors too: can they take the heat that comes with investing in sport, the sheer popularity of which moves the notoriously camera-shy venture capital industry in to the full glare of mainstream media attention?

The global sports business is valued at between $600 billion and $700 billion a year by KPMG. But its public profile far exceeds other investment categories of similar size. This mix of money and fame has attracted the attention of the investors of all types, from large private equity houses through to smaller VC funds, and high-net-worth individuals including a new generation of very rich sports men and women.

In the last week, Sapphire Ventures, formerly SAP Ventures, launched a $115 million sports fund with a mission to invest “at the intersection of sports, media and entertainment”, using money raised from a range of high-profile companies including City Football Group, the owners of Manchester City; Adidas; AEG; and the organisations that run the major leagues in the United States.

A new generation of superstar players is also getting in on the act. For example, Barcelona footballer Gerard Pique fronts Kosmos, a fund that recently bought the rights to develop the Davis Cup tennis competition, in a deal reported to be worth $3 billion over 25 years.

At the centre of all this activity are the rights holders – organisations that own the intellectual property rights to sports events, clubs or leagues. Fifa and Uefa in football or the GAA in case of Gaelic sport have seen a boom in the value of media and sponsorship rights of the past 20 years. This has transformed some of these organisations into multibillion-euro businesses.

To an outside investor, these sporting bodies can be the key to whether an investment is viable or not. “For private investors, the degree of control is fundamental,” says Nic Couchman, a lawyer and adviser to the sports investment sector.

“But sports governing bodies are naturally reluctant to cede control over their sport, given their responsibility to maintain the sport’s integrity and traditions.”

The secret to CVC’s Formula One investment lay in how Bernie Ecclestone had managed to separate these two roles: motorsport is governed by the Fédération Internationale de l’Automobile (FIA) but a separate entity owns, controls, promotes and exploits the sport’s commercial rights (Formula One Group).

This separation of commercial and governance is not for everyone, however.

“Complexity arises where the target sporting entity is owned by a collection of clubs or other members whose objectives are more sporting than commercial, particularly if their own interests are not entirely aligned,” says Couchman, whose firm Charles Russell Speechlys advised the International Tennis Federation in the Kosmos transaction. “Creative solutions are called for to secure the objectives of both the sports stakeholders and investors.”

There’s another big difference between sport and other type of investments: people care. Sports fans are not just another group of customers, they have a sense of ownership in teams, leagues and competitions of which other product categories can only dream. This makes sport investment potentially valuable, but also controversial.

For this reason, many VC investors seek to put their money in to ‘strategic adjacencies’, or areas attached to sport rather than the events and teams themselves. Investment money is flowing into less sexy but very valuable areas such as sports data analytics, stadium services and advertising technologies – when in a gold rush, sell shovels.

Changes in the way we watch sport are major drivers of the change, leaving governing bodies with a conundrum that requires long-term strategic thinking, says Elliot Richardson, chairman of Dugout, a football media company, which received series-A funding from Irish investors Frank and David McCourt.

“Most sports rights holders still rely on money from media and sponsorship rights. That’s changing, and private equity investment has a role to play in securing the future for sports. These clubs and leagues sit at the centre of the industry and have seen their fan bases increase enormously, but many of them know little about their own fans,” Richardson says.

“To do this requires professional data analytics models and people to interpret that data. By understanding the fan better, the more they can properly serve them with personalised services, such as ecommerce or OTT content-streaming services.”

How we consume sport in the next decade will differ markedly from the last one. All but the most fanatical sports fans are cutting the cord on the traditional sports television subscription bundles, undermining the future value of sports rights.

This will force the people who run sport to evolve. They are likely more closely resemble entertainment businesses than traditional sports governing bodies. That’s a shift that needs money, but also a radical change in culture, from selling media and sponsorship rights to marketing directly to fans. In the jargon of the industry, it moves the GAA from B2B (business to business) to D2C (direct to consumer).

And that’s a different game.