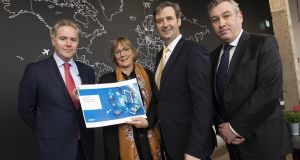 The Irish State is failing when it comes to fostering entrepreneurship, one of the Republic’s most successful businessmen has said.

Dómhnal Slattery, chief executive of aircraft leasing giant Avolon, told attendees at an event in Dublin that more must be done to encourage entrepreneurs to take necessary risks, including providing better tax incentives.

“Entrepreneurs create jobs. They don’t make a living, they make lives. They are the oxygen every economy needs,” said Mr Slattery. “My feeling is that we are unnecessarily starving our economy of this oxygen.”

The businessman told attendees at Enterprise Ireland’s “Appetite for Disrpution” event there is “no shortage of innovators and pioneers” in the Republic. However, he said despite punching well above its weight in many areas, the State does not currently have all the elements required to be leaders in the start-up space.

In a strongly-worded speech, Mr Slattery called for greater supports for fledgling entrepreneurs. He criticised a failure to promote entrepreneurship in the classroom and highlighted a need to attract more smart capital and provide more mentors for scaling companies.

The entrepreneur said while the Republic cannot compete directly with Silicon Valley in terms of its ecosystem and scale, we can learn to collaborate better instead. “We need to have the absolute best business network of any country, whether it is the mentors, innovators, academics or venture capitalists, the list goes on,” he said. “Politically we have achieved significant global influence. Few can match the connectivity enjoyed by the Irish around the world. Let’s take that intensity and commitment to the start-up world,” Mr Slattery added.

Avolon, which was founded by Mr Slattery in 2010, is the world’s third largest aircraft leasing business with a fleet of 971 aircraft. The company, which is majority owned by Bohai Leasing of China with Japanese financial services group Orix holding a minority stake, had revenues of $2.4 billion in 2017. Mr Slattery said the availability of smart capital is an area in which the Republic is “poorly served”.

“We need a tax structure that allows risk-taking to flourish. We need investors rewarded for their bravery, particularly at the early funding stage,” he said, adding that the tax incentives currently on offer are “major disincentives”.

“There must be greater support, including lower rates of capital gains tax and greater tax incentives given to founders to ensure that they realise their exits in Ireland and ultimately reinvest this capital back into the ecosystem,” he said.

Mr Slattery also criticised the lack of focus on entrepreneurship in the classroom, suggesting it was something that should be promoted even at primary level.

“More encouragement has to be built in to curriculums from an early stage to ensure that students are inspired to start their own business. We need our children growing up not just thinking about getting a job, but rather creating jobs, being their own boss. That ambition can and should be taught,” he said.

* This article was corrected on Tuesday, February 12th in relation to the majority ownership of Avolon.