The peculiar story of rugby and the Guinness logo 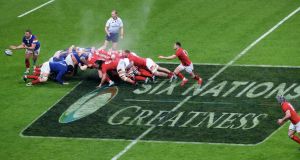 The solution to the French ban on alcohol advertising in the Wales v France match was to substitute the word Greatness for Guinness.

Rugby was just one of the games going on during the opening Guinness Six Nations match between France and Wales in Paris.

The other one involved the relationship between rugby fans and beer, a deep love affair of which the French government doesn’t approve.

This is due to the work of Claude Evin, a minister in the Mitterand government of the early 1990s and who is the patron saint of teetotallers and subliminal advertisers. Since 1991, Evin’s Law, or Loi Evin, bans the use of sports events to promote alcohol, an idea being copied some 30 years later, by Ireland. The implications of the 2018 Public Health (Alcohol) Act will properly kick in by November 2021 after a phased introduction, according to Colin Kavanagh, partner in law firm Arthur Cox.

Let’s put aside for a moment the big question of whether Loi Evin has worked in reducing French people’s appetite for booze. There are PhDs written on this subject, and very little evidence of a causal relationship. But like all public policy, Loi Evin has had unexpected consequences, most notably creating a cottage industry devoted to getting around the rules.

This is a challenge faced by Guinness, the new title sponsor of the Six Nations. In return for their multi million euro rights fee, the company gets a healthy share of advertising real estate at each of the 15 games a year. The most prominent spot is on the field of play, near the halfway line. This embeds the Guinness logo in to the game itself and by extension, the minds of television viewers.

Except of course, in the matches held in Paris, where such branding is illegal. The solution seen in the Wales v France match was to substitute the word Greatness for Guinness and hope we get the joke.

Rugby’s value to Guinness is considerable according to sports industry experts. Tim Crow, a veteran sponsorship insider and former adviser to Guinness, suggests that the French market represents around 40 per cent of the total media value from the Six Nations.

“The battle is not for share of stout, it’s for share of beer,” says Crow, “principally versus Heineken, Guinness’s major rival when it comes to rugby sponsorship”.

Rugby in particular is a great targeting tool. The Six Nations is hugely popular among the core rugby audience but also brings in casual fans, people who watch one or two matches a year.

Nielsen’s numbers back up Crow’s point. The research agency tracks the buying behaviour of the 6.6 million ‘rugby households’ in Britain and Ireland, estimating that they spend around €35 billion a year on FMCG products, over €200 more per person than football. Guinness ranks as the third most popular beer and lager brand among this key group, behind Heineken and Stella Artois.

Guinness’ Greatness stunt has its roots in an imaginary document, sometimes referred to as The Tobacco Playbook. This lists the tricks and tactics used by cigarette brands in so-called ‘dark markets,’ countries that forbid tobacco advertising.

The Tobacco Playbook has been studied by brain scientists and the marketing industry, seeking clues as to our susceptibility to advertising messages. Some years ago, I spent time with Martin Lindstrom, author of a multimillion-dollar neuro marketing research project.

The Ferrari and cigarettes

The context was the Ferrari formula one car, the sight of which Lindstrom claimed was making people crave a cigarette. Marlboro remains a Ferrari sponsor despite having no brand logo on the car. This doesn’t matter, said Lindstrom, the work has already been done. Like Guinness in rugby and GAA, Marlboro’s billions are still reaping a marketing return: In our minds, the red car is just an extension of the Marlboro brand.

“I’m endlessly impressed by Marlboro’s ability to take the core values of Formula One - sex, speed, innovation, coolness - and apply them to a cigarette brand.” says Lindstrom, a vehement anti smoker himself.

“That is an amazing achievement. Just by showing me a red Ferrari car, much more so than if you show them an advert for cigarette smoking. Even though that sponsorship is no longer legal we carried out experiments just showing a Formula One car, and people immediately craved cigarettes.”

All it needs is a trigger, a component of the brand - the colour, font, design - that acts as a signal. Obscure enough to get around the rules but understood by the target audience.

The next iteration of the playbook sees cigarette firms positioning themselves as tech businesses, and hoping we don’t notice. British American Tobacco just signed a new deal with McLaren which barely mentions the core product at all: “McLaren Applied Technologies will work with BAT on areas including battery technology and advanced materials,” a statement from the team read. “The two companies will share best practice, innovation knowhow and mutual experience.” And so on it goes, the playbook is a living breathing thing.

I came away from my conversations with Lindstrom unsure whether his theories were proper science or Grade A waffle.

But one thing does feel true: marketing bans are a beguilingly simple fix to complex societal problems. They give the impression of governmental action, but also force industries such as booze, cigarettes and betting to think harder.

Taking away brand logos and conventional communication channels can liberate advertisers from traditional marketing dogma. The result of that process is innovation.