The couple who brought organic kombucha to the Irish market 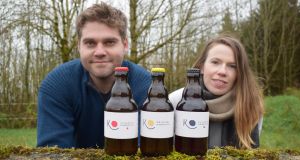 The fermented tea drink kombucha is thought to have originated in China over 200 years ago. It’s full of good bacteria that are beneficial to the gut and it has become a drink of choice for health-conscious consumers all over the world.

However, there is a big difference between mass-produced kombucha and craft-brewed kombucha which is produced in small batches with a handful of ingredients. The newly launched Irish-made KO Kombucha falls into the second category and is the creation of Ronan Coughlan and his life and business partner, Tracy Armstrong.

Prior to setting up KO, Coughlan and Armstrong were working in London. Coughlan’s background is in fine arts and he is a former art handler for Sotheby’s while Armstrong was circulation marketing manager for Hello magazine. Coughlan subsequently trained as a master brewer and in 2017 the couple gave up the bright lights of the city to move home and follow their dream of running their own business. They settled in Moate, in Co Westmeath, and now run KO from the Ferbane Food Hub in Co Offaly.

“Before we moved back we had been working behind the scenes on the idea for about six months developing our branding, flavours and route to market,” Armstrong says. “Once we were home we converted our spare bedroom into a micro-brewery and the KO journey continued. We moved into a commercial unit within seven months of selling our first bottles and we’re now stocked in over 100 health food stores, cafes and restaurants. We still do the distribution for Dublin, Galway and the midlands ourselves but are going to work with a distributor to cover off other areas.” The product is also sold online and delivery of a case of 12 bottles costs €35.

“After spending six years in London we found ourselves at a crossroads,” Armstrong says. “Should we stay or go home? The Irish economy was picking up and then the Brexit vote cemented our decision to return with our two-year-old son. We wanted to create something beneficial that would help people and we saw a gap to bring a top-quality kombucha to the Irish market. Many people feel that because kombucha is healthy it shouldn’t be tasty. We don’t agree. We strive to keep our product at optimum level with a short shelf life to ensure it is consumed fresh and alive.”

KO is positioned at the premium end of its segment and is based around organic ingredients. It comes in three flavours, original, blueberry and strawberry. “Our amber bottle preserves the living cultures inside as they are sensitive to light and our crown cap avoids the use of plastic,” Armstrong says.

“Fermented foods and drinks are now associated with promoting a healthy gut biome which in turn leads to a happier existence. Each bottle of KO is full to the brim with symbiotic cultures of bacteria and yeast that can aid digestion and boost immunity.”

The market for kombucha is growing worldwide and ultimately the couple would like to export. However, their immediate focus is on building KO into a strong domestic brand over the next three years. They have no plans to automate the hand-brewing process as being a producer of “real, raw live kombucha” is central to what they do, Armstrong says.

Investment in the business to date has been about €65,000 with support coming from Westmeath and Offaly LEOs and Enterprise Ireland. “Social media has been key in helping us market our product,” Armstrong says. “It’s a great tool as it allows us to be transparent and share an authentic story – something the big brands lack these days and the modern, ethically minded customer desires. Word of mouth has also played a big part in our growth and many of our listings were acquired through recommendations from people who had tried the drink.”