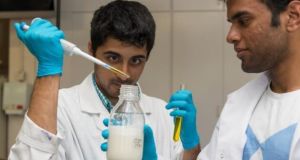 Ryan Pandya and Perumal Gandhi of Perfect Day, a company that is developing synthetic milk

A Cork-born biotechnology company that is seeking to bring synthetic milk to market has raised a further $34.75 million (€30.5 million) in investment.

Perfect Day – which got its start participating in the RebelBio accelerator programme – has developed a product that uses bioengineered yeast to produce real milk protein. This is achieved by adding cow DNA to yeast cells, which are then combined in vats with fatty acids and water to produce milk.

Formerly known as Muufri, the company was only founded when Perumal Gandhi and Ryan Pandya came together to apply for RebelBio, the world’s first life sciences accelerator programme, which was initiated and is still run by entrepreneur Sean O’Sullivan’s venture capital firm, SOSV.

The start-up was part of the first cohort selected to take part in the accelerator, receiving about $50,000 (€44,000) in seed funding, lab space at University College Cork and guidance from entrepreneurs including Mr O’Sullivan and CoderDojo co-founder and SOSV partner Bill Liao.

Perfect Day, which is headquartered in California, has just raised $34.75 million (€30.52 million) in a round led by Horizons Ventures, Temasek Holdings and ADM Capital. This brings total funds raised to date to about $60 million (€52 million) following a $24.7 million (€21.6 million) Series A round last year.

The company founders made headlines around the world when they announced plans for their cow-free milk product while taking part in the Cork accelerator in 2015.

In addition to producing synthetic milk, which the company hopes to have on supermarket shelves within a few years, Perfect Day has also previously spoken of a desire to expand into making animal-free eggs and meat.

The company received its first patent for the use of animal-free dairy proteins in food applications early last year.

SOSV, which is one of the largest and most prolific accelerator investors globally, relocated RebelBio to London from Cork last year due to what it said was a lack of incentives for investors and a lack of support from partners beyond Enterprise Ireland.

Prior to its decision to relocate the accelerator, SOSV had already cancelled a planned second annual instalment of RebelBio and withdrawn plans to establish a European version of its Food-X accelerator in the Republic for the same reasons.