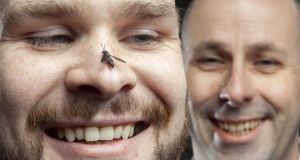 Hexafly, an Irish biotech start-up that has developed a new method of sustainable insect farming, is seeking to raise €10 million later this year to build a new production facility in Ashbourne, Co Meath.

The company, which has just closed a €1.1 million funding round, is also seeking to create 50 new jobs, with the possibility of many more to come.

Established by Alvan Hunt and John Lynam in 2016, Hexafly has raised €2.2 million to date with investors including the Halo Business Angel Network (HBAN), a joint initiative of InterTradeIreland and Enterprise Ireland. Other backers include Sean O’Sullivan’s SOSV, Yield Lab and Cedas Foundation.

A former participant in SOSV’s Rebel Bio programme in Cork – the world’s first life-sciences accelerator – Hexafly has received numerous awards since it was founded, including Ireland’s Best Young Entrepreneur Competition.

The company has developed an innovative method for converting waste products into high-value feeds, fertilisers and bioplastics that it supplies to a range of companies in the aqua and animal feed, medical, cosmetic, food and plant nutrition industries.

The company recently moved into a 1,393sq m (15,000 sq ft) commercial plant in Ashbourne, Co Meath, but is looking to construct a larger facility to meet a growing demand for insect-based products.

Speaking to The Irish Times, Mr Hunt, the start-up’s chief executive, said the company had effectively come up with a new protein source. He said Hexafly’s primary audience currently is the aquaculture sector where there is an issue with the quality and sustainability of feed in fish farming.

“Our insect protein can be used to replace fish meal and as an alternative source to soya. At the moment it is legal for aquaculture and pet feed,” said Mr Hunt.

“We’re expecting the European Union to shortly allow the use of insect protein for swine and poultry, which would really open the floodgates in terms of opportunities.

“As it is, we have enough to handle with the fish meal replacement market alone. That’s a $100 billion industry so there is huge scope for growth,” he added.

Mr Hunt said he was confident of raising additional funds, with investors seeking them out. He added the company hoped to have its new production facility open by the end of next year with additional jobs expected to be created as a result of this.

HBAN, which has invested in both of Hexafly’s previous funding rounds, said the €900,000 its angel investors have put into the start-up represents the organisation’s biggest investment in the agritech/biotech space to date.

“Hexafly is a really innovative company with huge promise. Although the company already has very strong export levels, there are other vast markets, including Asia and the US, that offer expansion possibilities,” said Julian Seymour, syndicates manager at HBAN.

“The investment in Hexafly is significant and highlights the high-potential of these types of sustainable companies,” he added.