Could water be the fuel of the future? 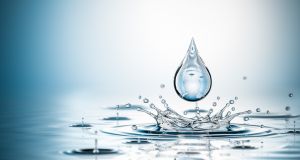 Drop by drop: water molecules are made up of one oxygen atom and two hydrogen atoms. Isolated hydrogen is known for its highly flammable properties, which make it a perfect fuel.

Through the development of a novel process which dramatically speeds up the time it takes to discover new, commercially viable solar fuel materials, researchers have discovered 12 promising new materials in just two years. To put this in context, it took scientists over four decades to identify the 16 existing “photoanodes” (photoelectrochemical cells or solar cells that produce electrical energy or hydrogen in a process similar to the electrolysis of water) they were already aware of.

For decades, solar fuels have been top of the research agenda for those in pursuit of clean-energy alternatives. Created using just water, sunlight and carbon dioxide, many potential target fuels could theoretically be developed with these three simple ingredients, one of the most promising being the production of hydrogen by splitting water.

Water molecules are made up of one oxygen atom and two hydrogen atoms. Isolated hydrogen is already known for its highly flammable properties, which make it a perfect fuel. If, therefore, it were possible to extract hydrogen from water simply by using sunlight, hey presto, you’d have yourself a virtually inexhaustible, renewable energy source.

Water is the source of this potential new fuel, ergo water is potentially the fuel of the future

There’s just one minor glitch to that hypothesis: water molecules don’t break down when sunlight shines on them. If that were the case, our so-called “Blue Planet” wouldn’t be covered almost entirely by oceans.

That’s where solar-powered catalysts enter the fray. In order to create viable solar fuels, scientists have spent decades developing cheap but efficient materials that serve to extract, say hydrogen, from water molecules with only visible light as an energy source.

“One misconception is that water itself is the fuel but that isn’t the case,” explains research leader John Gregoire from Caltech. “It’s the source from which we can make fuel.” (While most of the time this reporter would be the first to agree when scientists refrain from oversimplifying the fundamentals underpinning their research, sometimes they’re just splitting hairs. Water is the source of this potential new fuel, ergo water is potentially the fuel of the future.)

“You can already make fuels from water and CO2 but the process requires lots of energy,” says Gregoire. “We want to use sunlight so that is is a renewable.”

Gregoire works out of the Joint Centre for Artificial Photosynthesis (JCAP): a US department of energy innovation hub focused on “developing a cost-effective method of turning sunlight, water and carbon dioxide into fuel”.

“Ultimately we only need to find one material that works and, so far, all the materials previously discovered have failed for one reason or another. But it, heretofore, had taken years of experimentation to figure that out.”

It’s not only exciting to have found a dozen new potential photoanodes for making solar fuels, but even more so to have a new materials discovery pipeline

Earlier materials discovery approaches used inefficient testing methods where individual compounds were assessed for their potential use in applications. Now scientists can combine computational and experimental approaches by mining any collated materials’ database for potentially useful compounds, followed by rapid testing for candidates with the highest potential through the application of high-throughput experimentation.

“What is particularly significant about this study, which combines experiment and theory, is that in addition to identifying several new compounds for solar fuel applications, we were also able to learn something new about the underlying electronic structure of the materials themselves,” says Jeffrey Neaton, the director of the Molecular Foundry at Berkeley Labs.

“It’s not only exciting to have found a dozen new potential photoanodes for making solar fuels, but even more so to have a new materials discovery pipeline going forward.”

The researchers explored the potential of 174 metal vanadates. These are compounds which contain the elements vanadium and oxygen, and one other element from the periodic table.

SuperComputers conducted hundreds of wide-reaching, high-throughput theoretical calculations, followed by analysis through software that allowed the scientists to collate and understand what the most promising photoanode materials candidates were from this set.

We are continually identifying new contenders with this method

By combining new super-computational methods with innovative experimentation methods on new materials, the process could generate hypotheses and test experiments on these potential solar fuels thousands of times faster than humans could even dream of, thereby eliminating the time spent in the past waiting to get results from a new “photoanode”.

“Thus far, this approach has only been conducted on one class of specific materials – one family of crystal structures,” says Gregoire. “But there are many more. We are continually identifying new contenders with this method.”

“The key advance made by the team was to combine the best capabilities enabled by theory and supercomputers with novel, high-throughput experiments to generate scientific knowledge at an unprecedented rate,” says Gregoire.

The study, “Solar fuels photoanode materials discovery by integrating high-throughput theory and experiment”, appeared in the most recent online edition of the Proceedings of the National Academy of Sciences.