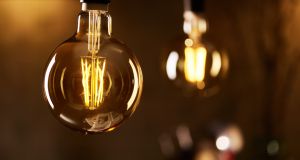 Adjusted earnings before interest, taxes, and amortisation (Ebita) were €142 million from €121 million in the same period a year earlier. Sales fell 0.7 per cent to €1.69 billion. Analysts polled for Reuters had seen sales down 2 per cent and Ebita at €136 million.

Philips repeated forecasts for improved margins and a return to sales growth in 2017. The decline in sales slowed “in comparison to previous quarters, driven by double-digit growth” in LED lights and home lighting systemsm, said chief executive Eric Rondolat. The LED division increased earnings to €39 million from €20 million, improving margins by cutting costs despite LED price erosion, the company said.

At its traditional lamps division, still its most profitable, earnings fell to €114 million from €124 million. Philips’ professional lighting division, which many analysts say represents its best opportunity to improve earnings, increased both sales and margins fractionally, leading to earnings of €13 million versus €6 million a year earlier.

Rondolat told reporters that the company has an order backlog in North America and results at the division should strengthen in the second half. The company’s home lighting systems division, which sells programmable LED lights under the “Hue” brand, swung to a €3 million profit from a loss of €12 million in the same period a year earlier, on the back of 20 per cent sales growth to €148 million – a strong performance in the division’s traditionally weakest quarter.

Philips floated its lighting division as a separate company in May 2016 and has gradually sold its stake down to 53.89 per cent. Shares, which were sold at €20 in the initial public offering, closed at €27 on Thursday.