Big pharma’s usefulness a bitter pill for some to swallow 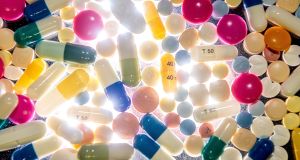 “Research costs lots of money with the expense of spotting, developing and proving the safety of promising drugs running into the billions.” Photograph: Philippe Huguen/AFP/Getty Images

People habitually complain about pharma companies, claiming they are commercial juggernauts only out there to make a buck and exert excessive influence over our family doctors, our state health services and our health and well-being. And it’s hard to disagree with some of these arguments.

The big pharma giants were established and are run in order to make money – just like any commercial operation. And they do have the potential to influence our well-being because of what they sell, drugs that restore health.

We might condemn them sometimes for being corporate bullies but the products they develop cure illnesses, improve quality of life for patients and tackle diseases that remain intractable. Things such as antibiotics, statins and blood pressure products developed by these companies save countless lives every day.

This is no apologia for the pharma giants. These are not charities. Much of the money they make goes to enriching shareholders with higher dividends rather than improving patient care. Yet that is the way capitalism works.

The pharma companies also point out that they direct millions of euro towards in-house research or buying up promising young companies that have discovered innovative new drug products, in order to bring their innovations to market. Ultimately the success of the pharma giants comes down to the quality of their research efforts and their ability to develop new drugs that can improve health.

Research costs lots of money with the expense of spotting, developing and proving the safety of promising drugs running into the billions. When costs rise to nine-digit figures the level of commercial risk also rockets, so the drug had better be successful.

Herein lies yet another reason why people love to hate the drug companies. What is a fair price to pay for a new drug? How does the company recoup the research costs and – given the complexity of many of the new large-molecule drug formulations – cover the high cost of manufacturing the drug.

A high-profile example of this is the debate over the cystic fibrosis drug Orkambi. Boston-based company Vertex came up with a drug combination that not only treats symptoms but also deals with the underlying causes of the condition, the company says. Trials have found the drug works very well in knocking out the effects of this genetic-based disorder.

Some CF patients found suitable for Orkambi say it has changed their lives, but with such high praise comes high cost. Vertex initially set the price for its new product at a colossal €225,000 a year per patient. Even by the time Minister for Health Simon Harris approved State support for the cost of the drug it was still about €159,000 per patient per year.

Is this a fair price? Should this or any drug be offered at such a staggering cost? I imagine it is too high. Yes it would have cost a lot to develop, prove and deliver Orkambi to market but there must be a generous “make hay while the sun shines” slice of the cost for the company and its owners.

It comes back to being able to reward research while also allowing affordable access. Balance between the two can be a challenge to achieve. And there are no signs that the cost structures that help to set price are going to get less complex in the near future.

Earlier this summer the Medicine for Ireland group issued a report saying the State was spending €140 million more on drugs per year than necessary. Medicine for Ireland represents the interests of companies involved in “biosimilar” drug manufacture, the production of generics. These drugs arise when a patent runs out and a very similar drug moves to replace it in the hopes of capturing a market.

The Government has already allowed for a choice between these generic drugs and mainstream drugs out of patent, but anything similar for Orkambi will not arise for many years. It shows, however, that even though the numbers with CF in Ireland at 1,200 are relatively small, companies still have an incentive to spend money on research in the hopes of tagging into an important discovery that will deliver profits down the line.

This represents an opportunity for Ireland’s academic and private-sector researchers who can deliver promising drugs to the big manufacturers. This business of filling the pipeline is increasingly important for new drug discovery, with the pharma giants unable to respond with the nimbleness of a university department or small specialist drug developer. Ireland has an ongoing opportunity to chase these developments, provided of course the research funding is available to allow this to happen.