UBS analyst said Tesla could lose €5,250 on every base model due to costs of powertrain 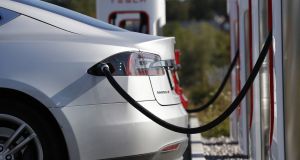 Tesla’s shares slumped 8 per cent on Friday after chief executive Elon Musk told the New York Times his tweet about taking the company private was not reviewed by anybody, and a brokerage raised doubts about the profitability of the electric carmaker’s Model 3 sedan.

Musk shocked markets last week with a tweet that he was considering taking Tesla private for $420 (€370) and that he had secured funding.

The paper also reported that efforts were underway to find a No. 2 executive to help take some of the pressure off Musk, after his tweet drew attention from US regulators and angered the company’s board.

Federal regulators are pressuring Tesla’s directors for details on how much information Musk had shared with them before the tweet went public, according to the Wall Street Journal.

The company’s stock was also under pressure after UBS analysts said in a research note that the carmaker’s premium Model 3 sedan will not produce better profit margins than a conventional BMW.

UBS analyst Colin Langan said Tesla could actually lose $6,000 (€5,258) on every base model due to higher costs for the powertrain, in the note titled “Is Tesla Revolutionary or Evolutionary?”

“While Tesla’s powertrain was better than peers in terms of cost per kWh and performance, their lead was not as large as we would have expected,” Langan said.

Tesla is banking on its Model 3 to ensure future profitability. The base model is priced at $35,000, but car buyers can upgrade to a $49,000 version, which has a longer range battery and high-end trim.

He said the powertrain modules are designed and built in-house by Tesla, which is enabling the company to move earlier with new technologies.

The Model 3 UBS Evidence Lab disassembled was a $49,000 version, which included the 75 kWh battery and the high end trim.

According to the note, Tesla’s gross margin comes in at 18 per cent for a high-end Model 3, while the BMW 330i records 21 per cent. The powertrain for Tesla’s Model 3 costs $17,827, more than double BMW spends on the component.

On Thursday, Evercore analysts said Tesla was on its way to make 8,000 Model 3 cars per week even as it burns more cash, basing their estimate on a visit to the company’s California factory. - Reuters