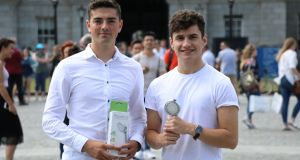 After weeks of little or no rain, the fact that water is a precious resource has begun to hit home to Irish consumers. We’ve all been encouraged to cut consumption, including the length of time we spend in the shower, and Trinity College-based start-up Greener Globe has come up with a product to help. It’s called Aquacica and it’s an LED shower head designed to reduce water wastage.

“Picture traffic light meets shower head,” says company co-founder Cian Fogarty, who established Greener Globe with school friend Jack Dooley in 2015. “The Aquacica system begins automatically and illuminates the water green as the shower starts. After five minutes the LEDs change to orange as a warning to the user. At the seven-minute mark the LEDs change to red, indicating that the optimal shower time is over and the user should finish. The shower head, which has been rigorously independently tested, meets international standards, is very user-friendly and has a universal fit. It is also powered kinetically, so no batteries are needed.”

The idea for Aquacica began as a transition year project around the time of the water charges controversy. “We were advised to tackle a ‘pain’ in society as a business idea, so we focused on creating a simple way to help people reduce their water wastage and in turn their water charges bill,” says Fogarty, who attended Tullamore College in Offaly with Dooley.

“The idea for the coloured LEDs came out of a brainstorming session. We felt it would work because it’s a familiar concept and easy for people to understand. We drew up all the specs for the product ourselves, and since then the idea has grown into a business.

“There are other LED shower heads out there but none designed specifically to save the consumer money. Most just change colour in relation to water temperature,” Fogarty adds.

“People have pointed out that we run the risk of others copying us. That is a possibility but so far nobody has bothered, and we don’t have the resources to patent the idea and defend it in court, even if we thought it was worth doing. Aquacica is our launch product. We have a number of others on the way in the water conservation area and are looking at patenting those.”

The founders are both still undergraduates with no plans to go full-time into the business until after they finish their courses. Fogarty is in second year science at Trinity while Dooley is a third-year commerce student at UCD. They are currently taking part in Trinity’s Launchbox accelerator programme for students and will follow that with a stint on the EU-backed cleantech accellerator, Climate-KIC.

The company’s target market for Aquacica is broad and includes private homes, gyms/leisure facilities and the hospitality sector. “Anyone who has a shower can use our product so it has large scaling capacity,” says Fogarty. “Initially, we are aiming at the Irish market. However, with the right funding there is an opportunity to sell globally. The rest of the EU and America are large markets as they already pay for water usage. There are lots of shower heads available but they have not been designed with the specific goal of reducing water wastage. Our product is also very competitively priced at €19.95.”

The business has been tightly boot-strapped to date, with hard cash costs being contained at about €15,000. Early support came from Offaly LEO and the founders were steeped when their LEO mentor, who has business connections in China, was able to help them source a suitable manufacturer there.

Aquacica was launched in 2017 and is available online. The founders are now in the process of talking to wholesalers and retailers. “Aquacica is marketed on all social media platforms and we are currently trying to take advantage of the interest in water surrounding the drought,” Fogarty says.