Water in Ireland goes through a vigorous filtration process so that it can be consumed by the public. Here's how it's done. Video: Irish Water 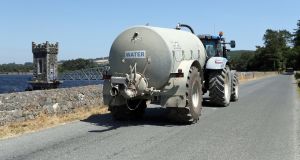 Why is it that we cannot seem to get things accomplished unless we are in the midst of a crisis? Things have to be going drastically wrong before the Government – usually driven by public sentiment – springs into action. Unfortunately these panicked responses are expensive and involve a lot of wasted money compared to a planned, long-term response to address problems that we already know exist and are staring us in the face.

The “homeless crisis” that suddenly arose as if by magic last winter is a perfect example. We have had a whole succession of these over the years, depending on how cold it gets or how many families with children there are without a place to sleep or call home.

What usually happens is the government in power promises action and things start to happen, mainly using resources that have had to be drained away from some other crisis situation that has gone off the boil. Once the pressure is off then things settle back to normal – which means little or nothing really has changed and we soon forget about the homeless families when the weather is better. But those like Fr Peter McVerry are still there, warning that the problem will be back again next winter as he and others have said for decades.

To be fair this Government has been very good at responding in a more measured way to issues such as the homeless, the disruption caused by last winter’s snows and the fodder crisis driven by excessive rain.

Now we have the ongoing drought and heatwave to contend with and yet another long-term issue that has been one of the many elephants wandering around the Dáil chamber - the provision of fresh, clean drinking water.

This crisis is different, however, as it involves all of us, not just the homeless or farmers or those needing a bed in one of our hospitals. We all expect clean water to come out of our taps and won’t be best pleased if it doesn’t happen.

The drought conditions have left our soils as dry as cardboard and our water sources running low. There were several days last week when consumers in Dublin and its environs used up to 609 million litres of water per day, right on the limit of the 610 million litres a day that Irish Water says it can deliver, so it is no exaggeration to say the city is on a knife edge when it comes to supply and demand. None of us should be surprised by this as the delivery of water to the city has been a problem for decades. Almost half of all the clean water pushed out by the reservoirs at Poulaphouca, Vartry and others spills into the ground through leaking antique pipelines, many of the largest installed during the Victorian era.

With a typical crisis the panic only persists while there is a problem but this time we really are in trouble. Reservoir levels are dropping and soils have lost much of their trapped moisture. This will have to be replaced before the arid conditions are over. Meanwhile, the drought is kicking off a second fodder crisis for farmers and crops are drying up in the fields. And as in the past this crisis has brought about a highly expensive response, one that has been under discussion for 20 years – a pipeline pumping water from the Shannon across the country to a reservoir outside Dublin.

This would deliver an extra 330 million litres a day to the Dublin supply, enough to meet the expected demand by 2050. You might be tempted to congratulate the officials for finally applying a bit of forward planning but don’t bother.

Some argue the 172km long pipeline’s €1.3 billion cost is a bargain compared to Irish Water’s estimate of €5 billion to modernise Dublin’s creaking network. But which of the two is the sensible option and which is the panicked response? The pipeline is very much the “quick fix” with all the water needed to keep consumers – and therefore government – happy well into the future delivered in a project that is “only” €1.3 billion and in operation by 2025.

Yet at some point we are going to have to tackle the leaking Dublin network and stop the waste of water and this won’t get any cheaper as the years roll on. The advantage of doing the dirty work first is water wastage goes down with every metre of water mains replaced, increasing the capacity of the network without having to build the Shannon pipeline at least for the moment.

Unfortunately for us the decision may already have been taken out of our hands due to climate change. Irish Water has to get a new supply hooked up as soon as possible because drought during summer and floods in winter is the scenario predicted for us more than 20 years ago by Maynooth University climate specialist John Sweeney.

This will mean lots of rain for the west while the eastern half of Ireland will face drought and a shortage of rainfall. The best option in this case becomes the panicked response of building the pipeline as fast as possible and leave worrying about the cost (we always go over budget on big ticket items, will we guess €2 billion?) for the next government coming down the road. And Dublin’s network will continue to leak.