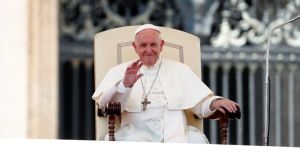 Pope Francis, who is soon to visit Ireland. For entreprensurs, to be able to see every situation as an opportunity is an incredible gift. Photograph: Max Rossi/Reuters

Legend has it my neighbour made his fortune entirely from Pope John Paul II’s visit to Ireland in 1979. While only an infant at the time, the closing year for the 1970s is hugely significant for me given how I, like thousands of other men, women, children and third-gender folks christened that year, was destined to be named John Paul. Sometimes I was even playfully referred to as “Karol” – a tip of the hat to the Polish pope’s mortal moniker.

My neighbour lived about 10 doors down in a big imposing house. He was rarely ever seen except if you were lucky enough to be passing by at the exact moment each day when he opened his front door to collect his newspaper. Wearing precious little more than a pair of slippers (courtesy of the Shelbourne Hotel), an open bath robe, and a Jack Nicholson smile, his isolated lifestyle made him easy pickings for bored, middle-class suburbanites.

So the story goes, he knew most people going to Phoenix Park would arrive underprepared and likely end up standing around for hours waiting to catch a glimpse of the holy one. My old neighbour capitalised on this by selling thousands of foldable chairs outside the park gates to “passersby for £5. He then bought the chairs back off the punters for £3 as they left the event only to travel all the way to Knock where he pulled off the whole deal again.

Notwithstanding the logistical questions raised by this oral account, the story demonstrates that entrepreneurial instinct only a few possess. To be able to see every situation – good or bad – as an opportunity is an incredible gift.

Brexit for Irish journalists is a bit like Trump is for US media. They don’t necessarily like what’s happening , but they know they’ll be gainfully employed for at least a couple more years covering the twists and turns of a story that can’t go away.

The British tech industry doesn’t see things the same way. In May, the annual Tech Nation 2018 report, a document based on the responses of thousands of members of the British tech community, put Brexit high on the list of concerns listed by start-ups of all shapes and sizes. With just a few exceptions, big business tended to be in favour of Britain staying in the EU because it made things easier to move money, people and products around the world.

Major concern Given London’s crucial role in Europe as a financial centre, there’s still major concern over jobs being lost to rival hubs

Those in business here might only see Brexit in a negative light too. However, there is ample opportunity for anyone smart enough to know people waiting for hours in Phoenix Park will pay anything for a chair. No matter how hard or soft that chair turns out to be.

Same goes for Brexit. Hard, soft, it doesn’t matter, Brexit will alter things in every sector, from the artistic to the regulatory. The Irish identity is often defined in terms emphasising what makes us “not English”. We may never lose that. Still with the major social change of late, combined with the economic implications of Brexit, how can things ever be the same again?

From early independence through to the glory years of EU membership and even now, both countries’ economies have relied on each other in so many ways.

Britain has steered our social and cultural narrative too, through its geographical proximity. Being neighbours has allowed for the provision of safe abortions to Irish women even when they were denied them at home.

The movement of artists between cultural cities such as Dublin and London, even Irish pop’s cultural parameters have been set through an Anglo-Irish prism.

But don’t shed a tear. Good riddance. Capitalise on this. Brexit opens up many doors for tech entrepreneurs who know how to develop the kinds of products and services that will suddenly be in big demand. How might artificial intelligence, clever algorithms or, say, blockchain, be exploited to help make the transition for Irish businesses tied up in the British economy more pain-free and smooth?

Organisations with internal network systems may need experts who can help them migrate data out of some British systems and into other EU partners’ systems. There’s the inevitable impact on fintech too.

Potential cybersecurity threats are also posed by Brexit. They are yet to be discussed or even identified but no matter. If you get there first, you’re already the leading expert on Brexit-related cybersecurity in town.

Brexit is every Irish entrepreneur’s 1979 papal visit. Among the chaos and discomfort caused by Britain’s departure comes the opportunity for quick thinkers to offer unexpected comfort and security to those affected, despite being in a metaphorical rainy field with hundreds of thousands of other concerned parishioners “Waiting for God 2.0”.