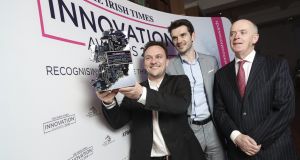 Dublin software company Aid:Tech, which has developed a secure way to deliver aid to people around the world using its blockchain-based platform, has won the overall Innovation of the Year Award 2018.

The company was the first in the world to deliver international aid using blockchain technology to Syrian refugees in northern Lebanon. It was founded by Joe Thompson and Niall Dennehy after Thompson ran the renowned 151-mile Moroccan desert marathon in 2009 but the money he raised disappeared. That led to an interest in the security benefits of blockchain technology for such endeavours.

“We found out that 30 per cent of international aid goes missing each year and we developed a solution which could verify to donors that their money has gone where it was intended,” said Dennehy.

Aid in the form of vouchers or actual cash can be sent via the blockchain-based platform completely securely with an unalterable record of receipt, thus helping address corruption and improving efficiency.

There are plans to roll out the technology in other areas. “It can be used to help people around the world to participate in the digital economy… People will be able to use it to gain access to micropayment services, banks and so on,” Dennehy said.

Aid:Tech won the IT and Fintech Award before going on to claim the top accolade ahead of four other category winners.

Other winners included Parkpnp, which describes itself as the Airbnb of parking. It won the Innovation award in the Sustainability category. Parkpnp users can rent out car parking spaces by the hour, day, week or month, and cash in on hitherto underutilised assets. The company has now expanded into the Belgian and Dutch markets, while it is looking to conduct its first trial in the US shortly.

Innopharma, based in Sandyford, won the Manufacturing and Design Award for its work on modified-release drugs, specifically the development of a system that enables the uniform application of coatings to the active ingredients contained within a tablet or capsule.

BidX1 won the New Frontiers category for its transparent and trusted online auction system which enables people to buy or sell property from anywhere in the world. The company says the key advantages of their system are efficiency, accountability and accessibility. While the typical residential sales process takes 28½ weeks, on BidX1 it takes an average of nine and a half weeks.

Belfast-based BrainWaveBank won the Life Sciences and Healthcare award for its “Fitbit for the brain” which has the potential to enable much earlier diagnosis of Alzheimer’s and other degenerative brain diseases with a view to facilitating earlier and hopefully more effective treatment of these conditions. The technology has been proven in a number of demonstrator trials and the company has just been asked by the Northern Ireland Department of Health to work on research into pre-psychosis in teenagers.

The awards, which are now in their ninth year, were presented at a ceremony attended by more than 200 people at the RDS Concert Hall in Dublin last night. Over 270 companies registered for the Awards this year.