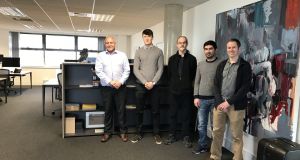 DIT spin-out Kastus won the 2017 Irish Times Innovation Award for its pioneering antimicrobial treatment that can be used to coat glass and ceramics or added to plastics and paint. The treatment has been proven to have a 99.99 per cent kill rate against harmful bacteria and fungi including antibiotic-resistant superbugs such as MRSA and E.coli.

“Our product is unique in being indoor light activated,” says Kastus founder and chief executive John Browne. “It doesn’t require UV light to work and it doesn’t affect the visual properties of the surface it is applied to in any way. It is permanent, very hard-wearing, chemically benign, economic to produce, and it produces no harmful byproducts.”

The process was supported by Hothouse, DIT’s knowledge transfer office, which is responsible for the commercialisation of intellectual property arising from DIT research and is the hub of innovation and technology transfer activities in DIT. That process involved product development, and extensive trials and testing in response to market research.

“We started with an initial feasibility study to see if the product could be commercially viable and to assess market need,” says Browne. “Once we had done that we moved on to development.”

The collaborative development project took four years and was co-funded by Browne and Enterprise Ireland. “This was a very slow process for someone like me, but we needed to ensure that we had a commercially viable product that worked and that customers would want,” he says.

The past 12 months have seen Kastus achieve a number of key milestones, according to Browne. “We closed a venture capital funding round of €3 million, we moved to new dedicated offices in Tallaght in the last few weeks, and we have grown the team substantially,” he says. “We now have 17 people working for us with several more due to start in the coming weeks. We have also closed some very significant deals with European manufacturers in the last quarter and we have some really exciting deals in the offing this quarter.”

Product development has continued as well. “From a technology and innovation point of view we are now working on a project which addresses the issue of water conservation in sanitary ceramics,” Browne notes. “Our R&D team have been working on a lot of different things in the background. We don’t want to be a one-trick pony. They are working on a range of projects to offer additional benefits for the core product. We want to take advantage of its easy clean, super hydrophilic, scratch resistant, and other properties.”

A hydrophile is a molecule or other molecular entity that is attracted to water molecules and tends to be dissolved by water.

The latest of those projects addresses water conservation in sanitary ceramics. “Water conservation is a hot topic at the moment,” says Kastus technical specialist William Denning. “The aim is to save water by reducing the flow through toilets. You can already see examples of this in products like dual flush toilets.”

He points to an EPA report on water-saving technologies to reduce waste consumption and wastewater production in Irish households which revealed the extent of the saving that can be made. “A significant uptake rate of water-saving devices and actions could reduce the domestic water demand in urban areas and improve water security in areas where water resources and/or the supply of treated water are under pressure,” it said.

It added that using more water-efficient toilet systems could save between 14 and 40 litres per day per individual or an overall per capita reduction of between 9 and 27 per cent.

“However, with these products, when enough water is removed from the flush system, you can enter into a trade-off between saving water and achieving a sufficiently clean toilet,” Denning adds. “What makes our product novel and exciting is that it makes ceramics easy to clean. This is where Kastus can be a game-changer for the industry. Our coating is both hydrophilic and anti-microbial. This means that less water can achieve better stain removal because of the hydrophilicity, while the anti-microbial aspect will be working all the time to kill any bacteria that would be present. Kastus can pave the way for widespread usage of water-saving technologies in this industry without having to compromise on hygiene.”

“It also reduces the requirement for chemicals needed in the cleaning process and this is very important as well,” adds Kastus chief technology officer James Kennedy.

“This is becoming a very hotly debated issue at the moment with some people advocating low-flow solutions and those on the other side of the argument saying they can lead to increased pathogen spread,” says Browne. “I was at the annual gathering of the British Bathroom Manufacturers Association in Wales recently and the subject was very much to the fore there. The Kastus solution comes in the middle and solves both issues at once. William has assisted in the development of new solutions like this since he joined us.”

Kennedy points out that collaboration still plays an important role in the research and development process. “We have close collaborations with the universities and with the Amber research centre for materials science at TCD. We also have two Science Foundation Ireland research fellows working in our team at the moment.”

Progress continues on the commercial front as well. “We continue to expand and thrive,” says Browne. “We are travelling extensively, meeting customers and signing new deals. A very large Turkish manufacturer is preparing for a product roll-out at the moment and we signed a commercial deal with in Oman recently. Ceramics manufacture is just one area of opportunity for us. The global glass manufacturing is another. Our product has applications for smartphone screens, glass splashbacks, fridge and freezers shelves and so on. The future looks very bright for us.”

There are still issues to overcome of course. “We are selling a product that is invisible and that has its own challenges,” Browne notes. “Typically, our clients take their own products and coat them with our product and then subject them to various tests. That makes for a long and complex sales process. We are trying to shorten our sales pipeline and Darragh O’Connor, who will join us shortly as our vice-president of sales and marketing, will bring vast experience to that. We are also investing heavily in our brand and working on a full rebrand at the moment. In addition, we are looking at holographic and 3D technologies to assist us to demonstrate the product.”

The company is on track to meet its objectives, Browne concludes. “We are on target to achieve profitability by this time next year. We are well funded and are well positioned to meet all our growth ambitions.”