Bringing pathology into digital era to speed up disease diagnosis 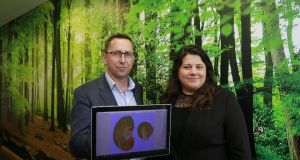 Deciphex chief executive Donal O’Shea and chief operations officer Mairin Rafferty. The idea for Deciphex was born over dinner in late 2016 when Mr O’Shea was at a pathology conference in London. Photograph: Nick Bradshaw

In other diagnostic areas such as imaging, digital technology means MRI and CT scans can be read on screen. However, pathology is still largely manual and dependent on physical slides being prepared by a lab technician and then put under a microscope for analysis by a pathologist. This takes time and puts huge pressure on overstretched pathology departments trying to deliver the fast results clinicians and patients want.

It’s a worldwide problem in search of a solution and fledgling company Deciphex, set up last year, is stepping up to the plate. “We saw the opportunity to support the broad adoption of ‘digital pathology’ that would allow pathologists to read cases on a computer monitor rather than under a microscope as at present. This will help them to work more efficiently and also offers a solution for an industry that is in crisis due to high workloads and staff shortages,” says Deciphex co-founder and chief executive Donal O’Shea.

“We have not seen the same transition to digital in pathology largely because the return on investment wasn’t compelling enough. However, the emergence of AI [artificial intelligence] changes the proposition. We can use AI and deep learning to interrogate tissue sections from biopsies to accelerate workflows and improve patient turnaround time and diagnostic accuracy in the clinical setting.”

The idea for Deciphex was born over dinner in late 2016 when O’Shea was at a pathology conference in London. “I was talking to a US pathologist and he was complaining about the ever-increasing expectations on the service and the fact that as a GI [gastrointestinal] pathologist he was routinely seeing over 50 per cent normal biopsies from endoscopic procedures – endoscopies and colonoscopies,” O’Shea says. “As GI pathology is approximately 20 per cent of the total diagnostic workload we immediately saw an opportunity to drive significant productivity gains by helping to triage out this normal content. This would allow pathologists to get to the problem cases faster and more efficiently.

“Our software builds a model of what normal content looks like and using this model it can identify areas of the biopsies that deviate from normal. Our technology is organ agnostic and our [patented] approach of generalised abnormality detection is unique,” O’Shea says.

Diagnostic volume and complexity are increasing all the time due to ageing populations but without any commensurate increase in the number of pathologists being trained. “We see AI as a sensible way to bridge the gap in the next decade and beyond. Around $12 billion is spent globally in employing pathologists to diagnose disease,” O’Shea says.

The Deciphex launch product is called Patholytix and in its early stages the technology will be targeted at pharmaceutical companies who will use it for clinical trials. “It’s one tech with the same core technology but it has different applications,” O’Shea says. Once Deciphex gets regulatory approval it will move into the GI biopsies market around 2020. The US is its big focus and in August this year the company announced a partnership with GI Partners of Illinois to develop the world’s largest GI pathology content database for deep learning purposes. “GI Partners does around 14,000 biopsies a year. The Mater hospital would do about 6,000. It’s a totally different scale,” O’Shea says.

Starting with the pharma market is relatively straightforward as it is dominated by roughly 10 major players and O’Shea has good connections in the sector. Over half have already shown an interest in Patholytix, which will be officially launched this November. Moving into the clinical market will be a tougher sell, however, as it’s more fragmented, says O’Shea.

Donal O’Shea is no stranger to the startup scene. Deciphex is his fourth company; his previous campus company, Slidepath, was sold to British digital pathology group, Gentix, in 2009 for €2.5 million. Gentix was subsequently sold to Danaher Corporation in 2010 and O’Shea then spent six years with Danaher in various executive roles including VP of its Leica Biosystems division.

O’Shea has a background in biotechnology and is a former lecturer at DCU. His co-founder is the company’s CTO, Mark Gregson, an expert in image analysis, machine learning and pattern recognition with more than 30 years’ experience developing slide scanning and image analysis products for cytogenetics and pathology.

He also has experience in diagnostic product regulation and intellectual property protection. The company’s COO is Mairin Raftery, who has a background in academia and biotech and experience in managing research programmes and generating IP portfolios. Deciphex is in the process of expanding its team and is now up to eight people. This will rise to about 25 over the next two years.

Development costs to date have been in the order of €750,000 which has been largely privately funded. “We have a broad network of people who know our pedigree and were willing to row in behind us,” O’Shea says. “We have also had backing from EI and from the EU and have been successful in winning a €2 million EU Fast Track to Innovation grant in conjunction with Janssen Pharmaceuticals (J&J) to accelerate the development of artificial intelligence-based workflows for pre-clinical pathology.” The company is negotiating what O’Shea describes as “a substantial funding round”.

O’Shea admits to enjoying the fast pace of startup life which he describes as “like running down a hill with a big boulder chasing you”. He says the most difficult part is always maintaining capital requirements and that the benefit of being older and wiser is that “you tend to be calmer and cooler and less emotional about things. Younger founders are very emotionally invested and that saps a lot of energy,” he says.

Asked what he is doing differently this time around, O’Shea says: “We have had a global mindset since the off and have put America – which is the biggest market in the world for healthcare – at the front of our thinking. Lessons learned from past errors would include staying on core message but also seeing the bigger picture. Looking back I’ve also realised we didn’t raise enough capital early on. I think the big challenge for us is getting heard because there’s a lot of clatter in modern markets and it’s easy to be drowned out. You have to create a real dynamic energy about your business and leverage all the available channels to create a buzz around what you’re doing.”