Little nuggets to help children get their five a day 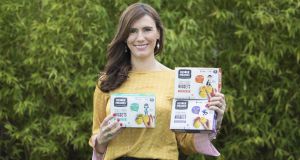 Aileen Cox Blundell: “There are currently 880,000 children in Ireland under the age of 12 and only one in four are eating the right amount of vegetables every day.”

Aileen Cox Blundell is a graphic designer and art director by background who has worked in Ireland and the United States for companies such as Fyffes and Total Produce. She knows how easily presentation can affect consumer perception of a product and that when it comes to vegetables, it doesn’t take much to put children off eating their greens. Cox Blundell is also a food lover and a mum and she decided that tackling this perennial problem in a more child-friendly way was the key to success.

She knew the product would have to be presented with a twist if it was going to hit the spot with its picky audience; and, recognising that nuggets are usually a big hit with youngsters, she decided to make the most of this preference. What she has come up with is Hidden Heroes, a healthy convenience food aimed at parents that encourages kids to eat more vegetables.

Hidden Heroes are a range of frozen vegetable nuggets in three flavours suitable for children in the three to 12 age group. The first three varieties, beetroot, sweet potato and broccoli and spinach, will be launched in January.

Cox Blundell is in the happy position of having a ready-made pool of potential customers through her Baby Led Feeding platform, which has more than 100,000 followers. “It all started in 2015 when I set up Baby Led Feeding in an effort to tackle the childhood obesity statistics,” she says. “I then wrote The Baby Led Cookbook which was released in 2017. It has sold almost 10,000 copies in the past year. I became a brand ambassador for Dunnes Stores and this gave me the platform to reach many more parents and to show them that healthy home-cooked meals can be tasty, inexpensive and accessible to everyone. There are currently 880,000 children in Ireland under the age of 12 and only one in four are eating the right amount of vegetables every day.

“I have talked to literally thousands of parents over the past three years and the problems are not when babies are starting weaning, but when they turn two and start showing signs of independence. That’s when the fussiness begins. Usually green vegetables are the first things thrown on the floor and it can get progressively worse to a point where the child is eating very little good food at all. I have met mums who have cried on my shoulder in despair over the feeding habits of their children and I felt I had to do something.”

Cox Blundell set up Hidden Heroes earlier this year and recently participated in the high-potential start-up Foodworks programme run jointly by Enterprise Ireland, Bord Bia and Teagasc. She has stepped back from the day-to-day running of her graphic design company to focus full time on developing her new business and is now in the process of finalising her (outsourced) manufacturing and pitching for retail listings.

Investment in the business so far has been in the order of €100,000, which has come from personal resources and support from Enterprise Ireland. The company is now looking to raise about €500,00 through venture funding and Enterprise Ireland competitive-start support. Ideally Cox Blundell would like to find a private investor with food sector experience to help the business grow.

“We have sourced the best possible ingredients for Hidden Heroes and have painstakingly worked on creating a product that no nasties, no additives or any other ingredients you can’t pronounce. In addition to the vegetables the nuggets contain plant-based proteins which will make them filling,” she says. “The aim is not to lecture parents about their children’s diet, but to understand the difficulties they face and give them a healthy option that will help make their lives that little bit easier.”