Business Week: also in the news was jobs; houses; economy; and banker accountability 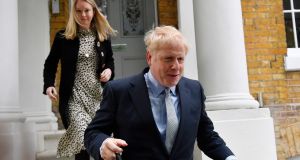 Boris Johnson’s surge towards Downing St appeared to provoke a hardening of the rhetoric in Europe this week as EU leaders braced for a new phase – and perhaps a new level – of British delusion.

Boris Johnson and foreign secretary Jeremy Hunt are the two remaining candidates for the Tory leadership after this week’s votes, and both have claimed that new arrangements to leave the EU by agreement can be concluded before October 31st.

Taoiseach Leo Varadkar was in no mood to entertain the political posturing of the would-be prime ministers, warning that there was “enormous hostility” among European leaders to any further Brexit extension.

“There is very much a strong view across the EU that there shouldn’t be any more extensions,” he said. “While I have endless patience, some of my colleagues have lost patience with the UK and there is enormous hostility to any further extension.

Whatever about an election, the odds of a second referendum seem long at this point, while the risk of a chaotic no-deal Brexit in the autumn has grown exponentially following Theresa May’s departure and the Tories’ lurch to a hardliner like Johnson.

The International Monetary Fund (IMF) this week said the Government should provide support to hard-hit sectors if a no-deal Brexit comes to pass, but otherwise to let the economy operate freely to support itself.

However, following its annual consultations with member countries, the fund acknowledged that Ireland was “uniquely vulnerable” to a no-deal Brexit and suggested a fiscal stimulus may be called for “depending on the severity of the downturn”.

One sector that is vulnerable is beef, and there will have been relief among farmers after a €50 million euro aid package was agreed for them, a sum which can be matched by national funds to take the total to €100 million.

Meanwhile, a report from the Economic and Social Research Institute suggested Brexit is already having a direct impact on the Republic’s economy in the shape of more cautious consumers spending less than would normally be expected.

It’s not all bad news though. IDA Ireland said more than 80 Brexit-related foreign direct investment projects have been won by the Republic since the UK voted to leave the EU in June 2016, resulting in an additional 5,300 jobs.

Jobs, jobs, but no houses

You can’t move for jobs announcements these days, so much so that the latest one – from networking company LinkedIn – included a nod to the fact that we may not have the workforce to fill the roles.

The US company is to create 800 new jobs in Dublin and hopes to fill a significant number of them by encouraging those who have left the workplace to return.

It said that given the Republic is at full employment, it is expanding its ‘ReturnIn’ programme, which provides support for individuals returning to employment after taking time out to look after children or care for a dependent.

One of the big questions that follow such announcements however, is where are the people who will have to move to Dublin to take these jobs going to live?

One possible solution, suggested by the Economic and Social Research Institute (ESRI) this week, is that vacant development sites should be taxed more aggressively to cut the cost of building homes and to spur supply.

Loopholes being used by landowners should also be closed, according to ESRI research professor Kieran McQuinn. “We need to tighten up on that,” he said.

Somewhere else the Government may seek to tighten up is the recouping of funds from tax defaulters. New figures this week showed that almost €40 million remains unpaid to the Revenue in taxes, penalties and interest from defaulters in 2017 and 2018.

Meanwhile, EY revised its gross domestic product growth forecast for the State slightly upwards to 4.1 per cent in 2019 on the back of positive data in the first three months of the year.

It said an extra 81,200 net new jobs in the year to March and corporate tax returns exceeded expectations, noting that the “impressive” growth was coming at a cost, including talent shortages which were set to continue.

On that note, and in spite of all the calls for prudence given the well-flagged economic challenges coming down the line, the Government appears bent on making hay while the sun shines.

Taoiseach Leo Varadkar announced a €350 million loan to Dublin Airport to improve passenger services, facilities and capacity when he visited the headquarters of the European Investment Bank.

Bankers to be held accountable

It’s something many people have been calling for since the banking crisis that crippled the economy and the State more than a decade ago – and they might be about to get their wish.

Under planned new laws being drawn up in the wake of the tracker-mortgage scandal, the Central Bank will for the first time be able to fine and disqualify senior bankers for failings under their watch without first proving wrongdoing by their employers.

Firms will have to outline clearly where senior individuals’ responsibilities lie, but the new law is expected to come into force from next year.

Staying with the Central Bank, it is also set to start recording details of personal contract plans (PCPs) for car purchases; hire purchase deals; as well as similar types of finance on its credit register from June 30th.

It will mark the first time the regulator has sought to capture such data on its central credit register. The purpose of the register is to provide greater transparency to lenders when people apply for a loan.

Finally, with the issue of banker bonuses back in the headlines these days, European Central Bank head of banking supervision Andrea Enria told a Dublin conference that banks are paying bonuses that are too focused on cash instead of shares. Imagine that.