Once in power, his stubborn Islamist policies brought protesters on to the streets 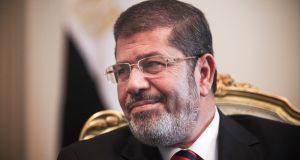 Mohammed Morsi: died at the age of 67 after collapsing in court during a retrial of charges of espionage. Photograph: Tara Todras-Whitehill/The New York Times

In 2012 Mohamed Morsi became Egypt’s first democratically chosen president. A year later he was overthrown by the military and held in prison on a series of convictions. He has died at the age of 67 after collapsing in court during a retrial of charges of espionage with the Palestinian Hamas organisation.

In 2011 a revolution had ousted Hosni Mubarak, Egypt’s president since 1981. Elections held in June the following year brought the Muslim Brotherhood to power. The new president was the Brotherhood’s Morsi, who defeated the former prime minister, Ahmed Shafiq, with 51.7 per cent of the vote, vowing that he would be inclusive and maintain Egypt’s 1979 accord with Israel.

Once he was in power, Morsi’s stubborn Islamist policies brought protesters back into the streets in such huge numbers that in July 2013 the army sacked the government, arresting Morsi and fellow Muslim Brothers. He was taken to the headquarters of the Republican Guard in eastern Cairo, where many of his supporters were later gunned down by the army.

As president, Morsi had had no clear plan for economic recovery in Egypt. He failed to clean up the notorious security apparatus, which continued to torture and kill protesters. His followers attacked Egypt’s Coptic and Shia minorities and upset liberals by threatening to close shops by 10pm, in a country that lives by night, to help citizens attend the dawn prayer.

By June 2013 Morsi was at loggerheads with Muslim and Christian clerics, the judiciary, the police, the intelligence services and, crucially, the army. As protesters lined the streets demanding an end to Morsi’s presidency, on July 1st the army delivered an ultimatum that required Morsi to resolve the political crisis within 48 hours. When he failed, on July 3rd it overthrew Morsi, installing Adly Mansour as the interim head of state in his place until the installation of Abdel Fatah el-Sisi in 2014, and ordering the arrest of many members of the Muslim Brotherhood.

The eldest of five brothers, Morsi was born in the village of El-Adwah in northern Egypt. His father was a poor farmer; Morsi remembered being taken to school on the back of a donkey. He graduated with a BA in engineering from Cairo University in 1975 and an MA in metallurgy in 1978.

That year, he married his 17-year-old cousin Naglaa Mahmoud. She later told a magazine that he helped with household chores and cooked for her. “I like everything about him,” she said. “Our fights never lasted for more than a few minutes.” Morsi told an Egyptian television channel that marrying her was “the biggest personal achievement of my life”.

Morsi lived in the US for several years: he studied for a doctorate at California State University, Northridge, where he was an assistant professor of engineering from 1982 until his return to Egypt in 1985. Then he served as head of the materials engineering department of Zagazig University. Morsi was a member of Egypt’s parliament from 2000 to 2005.

In November 2013 Morsi was put on trial, charged with incitement to murder, In April 2015, Morsi was sentenced to 20 years over deaths during clashes between opposition protesters and Brotherhood supporters outside the presidential palace in Cairo in December 2012. A month later, he was sentenced to death after being convicted of colluding with Hamas and Hezbollah militants to organise a mass prison break during the uprising against Mubarak, and in June the sentence was upheld after consultations with Egypt’s grand mufti. In November 2016 the court of cassation ordered a retrial of that charge and others relating to foreign organisations.

Morsi and his wife had four sons, Ahmed, Omar, Osama and Abdullah, and a daughter, Shaimaa.