Irish battery breakthrough could help save the planet 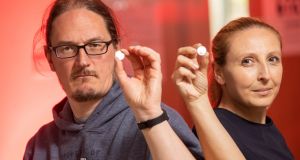 Do you want your phone battery to last longer? Are you curious about electric cars but afraid they won’t take you far enough? Would you like to install a home wind turbine but aren’t thrilled with its storage capacity?

A team of Irish academics may just have solved these problems. In a highly significant breakthrough, scientists at AMBER, the Science Foundation Ireland Centre for Advanced Materials and BioEngineering Research, and Nokia Bell Labs have found an inexpensive way to make batteries more compact, scalable for industry, quicker to charge and with 250 per cent more energy density than any other battery on the market.

The findings of Valeria Nicolosi, professor of nanomaterials and advanced microscopy at Trinity College, Jonathan Coleman, professor of chemical physics in the school of physics at the same university, and Paul King from Nokia Bell Labs, could mean improved battery life in common devices such as mobile phones, remote controls and children’s toys, as well as electric cars being able to run for longer. And there’s new potential for batteries to store excess energy generated from renewable sources such as wind, wave and solar.

The results are published in Nature Energy, a leading international science journal, and the research was co-funded by Nokia Bell Labs.

Nicolosi says that her experience as a chemist and Coleman’s experience in physics meant they could combine their different perspectives. “With batteries, their problems and limitations are dictated by the materials used to make them,” she explains. “I’ve worked for so many years with nanomaterials, that it was a natural development to apply my experience to batteries – one of the biggest issues in science.”

Typically, battery storage capacity increases by about 3-5 per cent a year, whereas the AMBER team has gone much further. Their battery’s capacity is not an incremental increase: it’s a massive leap. “This new, highly rechargeable battery is a game-changer in science: ultra-performing, it stores at least 8,000 mAh (2.5 times the current energy) in the same volume as the current market-leading super slim battery,” says Nicolosi. “We have shown unbeatable results with battery storage.”

We’re all so used to grabbing a packet of batteries in the local shop and popping them into our cameras, but few of us are aware of how relatively low-tech batteries still are. “As anyone who owns a phone knows, batteries just don’t store as much energy as we would like them to,” says Coleman. “Anyone driving an electric car has range anxiety about how far they can go. With renewables, we know the wind isn’t going to blow all the time and that the sun won’t always shine, so it’s been an imperative in recent years to store the energy. But how? If we want better electric cars or more renewable energy, we need better batteries.”

Nicolosi and Coleman knew that there are materials that could be used to make better batteries, and that current technologies meant batteries are not performing to their full potential. “Battery manufacturers insert carbon black – this is what we know of as soot – as a very cheap electricity conductor and it is stuck together in a battery with lithium and plastic to stick it together,” says Coleman. “We wanted to solve the problem of how it could better conduct electricity and it kept coming back to using better materials in order to provide more storage space.”

They didn’t need to invent new materials, they explain: they just needed to make better use of what was already there. They used a material called carbon nanotubes – these are strong, durable microscopic carbon tubes that are superb electricity conductors. “We took the lithium material and added a few per cent of carbon nanotubes which gave us a very unusual particle structure,” Coleman says. “This is important because the existing electrodes in your phone or toothbrush, if thicker, can store more charge. We found that adding the nanotubes made sure that the electrodes are stronger.”

The breakthrough discovery doesn’t just potentially make life a bit easier for the average person: it could also be a crucial tool in the battle to save the planet from environmental degradation and climate breakdown. “If a battery is storing more power, it doesn’t need to be replaced as often, which has clear environmental benefits,” explains Nicolosi. “They will also save energy and so, by default, be less wasteful. The only caveat is that any new technology going from a lab to a commercial factor always sees a slight reduction in capacity: this is because what we do in the lab is harder to do than in a factory that may be producing one million batteries per month.”

Coleman adds that excess power generated by renewables needs to be stored. “Batteries are the way to do this and, in particular, that excess energy could be very efficiently stored in electric car batteries. In addition, our technology takes carbon nanotubes and adds them to lithium-storing material, but it is quite feasible that common, non-toxic silicon could be used in commercial batteries, which would make them cleaner and more sustainable.”

Nicolosi and Coleman point out that they are not engineers and they’re reluctant to be drawn on how their new discovery might be applied by industry. But the implications are fairly clear. “We have developed a way to take existing commercial battery materials and make them work at 100 per cent of their capacity, meaning that these can be used in almost any type of battery,” they both say.

Likely customers for this technology include, most obviously, battery manufacturers such as Duracell and Panasonic, car manufacturers and the renewable energy industry. If patented. it could be a good money spinner for Trinity College, CRANN (the Trinity Centre for Research on Adaptive Nanostructures and Nanodevices) and, potentially, its inventors.

In the longer term, Nicolosi says that research into batteries will continue. “We are trying to solve issues around lithium ion batteries and anything that is battery powered,” she says. “We are also going to have to work on replacing lithium in batteries and better ways to recycle these materials. The biggest challenge will be to apply discoveries to non-lithium batteries.”

Coleman, meanwhile, points out that this technology is just one part of AMER’s story, with other recent breakthroughs including a faster mechanism for charging batteries.

How do they feel about their success? “The result surprised us,” says Coleman. “We haven’t worked on batteries for long and usually have to ramp up the research before achieving a result like this. It’s unusual to have an idea like this which worked so fast.”

Panel: Is it a plane? No, it’s an electric plane

The airline industry – and the eight million of us who take an airplane every day – is among the biggest contributors to global pollution and climate breakdown. As a result, Greta Thunberg, the 16-year-old climate activist who has inspired a generation of young people to go green, travels to give speeches by train.

Many more are feeling guilty about the air miles they accrue and are trying to fly less. In the medium to long-term, it will become unsustainable to power planes with jet fuel. Could better electric batteries be the answer?

“I hope that these batteries can be used for all sorts of different technologies,” says Professor Jonathan Coleman, co-lead investigator on the project. “Tesla has a branch that is looking at battery-powered aeroplanes. Their founder, Elon Musk, says that large battery-powered aircraft could become feasible once the batteries can store 400 watts per hour. Our technology is at 480 watts. There are some caveats as to how exactly it would work, but we will point that we are above the threshold.”

Perhaps Coleman and his co-lead investigator, Professor Valeria Nicolosi, will, in the not-too-distant future, join Thunberg at an international conference which they reached by an electric airplane powered solely by renewable energy sources and talk about how, at this pivotal time in history, scientists and activists came together and managed to save the planet.