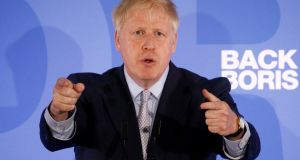 Conservative Party leadership candidate Boris Johnson claimed there would be no trade tariffs or quotas in a no-deal Brexit scenario.

Speaking on Friday, Mr Carney said tariffs would be applied “automatically” if there was no agreement with the bloc because the EU would need to follow World Trade Organisation rules. These require that all members apply the same tariffs to all of their trading partners with whom they do not have a free-trade agreement.

At the Tory leadership debate on Tuesday, Mr Johnson claimed “there will be no tariffs, there will be no quotas because what we want to do is to get a standstill in our current arrangements under Gatt 24, or whatever it happens to be, until such a time as we have negotiated the [long-term deal with the EU].”

Gatt 24 is an article in the WTO rules that dates back to its predecessor treaties, the General Agreement on Tariffs and Trade.

Mr Carney’s comments are supported by trade economists and lawyers, who have long been bemused by Brexiter arguments that the clause would allow British exports to continue to flow untaxed and without restrictions after a no-deal exit.

Most EU tariffs on industrial goods are low, but they are very high on certain agricultural products, such as lamb, and finished motor vehicles face a 10 per cent tariff.

Mr Carney stressed that the provisions of Gatt 24 were possible only in the event of an agreement between two countries. This is, by definition, impossible in a no-deal Brexit scenario.

“Not having an agreement with the EU means that there are tariffs automatically because the Europeans have to apply the same rules to us as they apply to everyone else,” the governor pointed out.

“If they were to decide not to put in place the tariffs, they would also have to lower tariffs with the US, with Canada, with the rest of the world,” he added.

This refers to the most favoured nation principle, requiring countries to refrain from singling out others for different trade regimes outside a formal free-trade agreement lodged with the WTO.

“The Gatt rules are clear . . . Gatt 24 applies if you have a [withdrawal] agreement, not if you’ve decided not to have an agreement, or you have been unable to come to an agreement,” Mr Carney said.

Speaking on the BBC Today programme, Mr Carney went on to highlight that 150,000 businesses are “not fully ready” for a no-deal Brexit because their paperwork is not in order.

Only 40 per cent of businesses would be able to continue to export to the EU under no-deal, he said, although this had risen from 20 per cent six months ago.

The governor also said businesses have been stockpiling but warned there would only be “weeks” of emergency stocks in a no-deal scenario and business would be “reliant” on government to keep ports open.

He said: “They have done that and those stocks are sitting there and it provides a very short-term level of preparation . . . well, weeks really.”

The governor’s views on tariffs are supported by trade experts. Holger Hestermeyer, a reader in law at King’s College London, said that for GATT 24 to be applicable, “the main thing you need is an agreement. Literally you need a deal. Article 24 is not a no-deal option”.

Martin Howe, the chairman of Lawyers for Britain, a Brexit-supporting group of lawyers, wrote this week that article 24 could be used to avoid the imposition of tariffs, but only in circumstances where there was at least a temporary agreement between the EU and UK, which he suggested was possible.

“The UK and the EU can enter into a temporary free-trade agreement, intended to last only until the full FTA is negotiated and concluded,” he wrote.

However, such a temporary agreement in the event of no deal has been ruled out repeatedly by the EU with Cecilia Malmstrom, the EU’s trade commissioner, saying that Brexiters were “completely wrong” to assume the EU would sign a rapid temporary trade deal with the UK in the event of a rejection of the withdrawal agreement.

If there was no deal, “that will mean new tariffs”, she said. – Copyright The Financial Times Limited 2019/PA

1 118 Grafton Street offers prime pitch for the post-pandemic era
2 How to avoid a communication breakdown
3 ‘It’s fantastic living here – in the gateway to Asia’
4 Sorry, Domhnall Gleeson, I don’t want to chat to you anymore
5 Can we finally say farewell to the scourge of hot-desking?
6 Irish tech company Asavie acquired by Nasdaq-listed Akamai
7 Whistleblower warned EY of Wirecard fraud four years before collapse
8 Customers judging trustworthiness based on Covid-19 behaviour
9 Brexit to curb services trade with UK, accountants group warns
10 Wifi problems? Quick tips to get your home internet out of the slow lane
Real news has value SUBSCRIBE