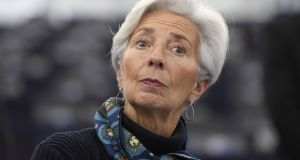 Eight minutes after Wednesday midnight in Frankfurt, European Central Bank (ECB) president Christine Lagarde took to Twitter to channel her own version of predecessor Mario Dragh’s crisis-era “whatever it takes to preserve the euro” moment.

“Extraordinary times require extraordinary action,” she posted, just after the ECB governing council signed off on a €750 billion emergency bond-buying package to quell financial markets that have been whipped in the past month by the escalating Covid-19 crisis. “There are no limits to our commitment to the euro.”

The move is a godsend for euro zone governments, who will have to borrow hundreds of billions of euro in debt markets in the comings months to fight Covid-19’s assault on their health systems and economies.

However, it’s likely to prompt claims that the ECB is dangerously close to monetary financing of states – something that is illegal under European Union treaties.

The central bank’s existing multitrillion-euro bond-buying programme, in place since 2015, was designed ostensibly to push inflation back to the ECB’s target of close to 2 per cent. That is its only mandate.

Of course, it also drove government – and corporate – borrowing costs down to record lows. But Draghi could argue that he was not financing governments, as countries across Europe – including Ireland – were reining in budget deficits. (Not that it saved him from constitutional challenge, with Germany’s supreme court in Karlsruhe home to a long-running case about the legality of the programme.)

This time, however, the ECB will be an active buyer in the secondary market at a time when governments are preparing to issue massive amounts of bonds.

Predictably, the hastily-convened teleconference call that led to the new €750 billion Pandemic Emergency Purchase Programme heard objections from some quarters, including, according to reports, governors of the German and Dutch central banks.

These were overruled by Lagarde. But she probably would not have been backed into a corner and forced to spearhead such an action and historic “no limits” comment had she not botched her first attempt to quell the markets last week.

In a press conference that followed an initial underwhelming ECB governing council response to the unfolding crisis on March 12th, Lagarde said it was not the bank’s role to “close the spread” – the difference in market interest rates, or yields – between Italian and German sovereign bonds.

The clumsy remark was interpreted by investors that the ECB was prepared to leave Italy, ground zero in Europe’s coronavirus crisis and one of the world’s most indebted countries, and other states high and dry as they counted the human and economic cost of the coronavirus pandemic.

The ECB’s chief economist, Irish man Philip Lane, sought to limit the fallout the following day, saying the bank stood ready to take more action “to ensure that the elevated spreads that we see in response to the acceleration of the spreading of the coronavirus do not undermine transmission” of its monetary policy to all countries in the euro zone.

But the damage was already done. Italian and Spanish borrowing costs continued to soar. Only drastic action would do.

Since the €750 billion package was announced, 10-year Italian, Spanish and Irish bond yields have subsequently halved to about 1.61 per cent, 0.75 per cent, and 0.24 per cent, respectively.

In addition, the ECB signalled that it is prepared to ease a requirement to only buy bonds in proportion to the size of each individual euro zone economy. This will be a relief to southern European governments, and, to a lesser extent, Ireland’s National Treasury Management Agency (NTMA).

The NTMA started the year with about €16 billion of cash on it balance sheet. It has subsequently raised €5 billion in the long-term bond markets – which would essentially cover about €20 billion of debt that is due to be repaid this year, including a €10.6 billion bond that matures next month.

The State’s debt agency had originally planned at the beginning of 2020 to raise between €10 billion and €14 billion to prefund the redemption of bonds that fall due next year as the Government targeted a budget surplus of 0.7 per cent of gross domestic product.

Those calculations are now redundant. Government officials estimate that the total fiscal cost of the coronavirus could reach €10 billion, The Irish Times reported on Friday. But the final figure is far from certain.

“It’s finger in the air stuff at this stage,” says Ryan McGrath, head of fixed income strategy at Cantor Fitzgerald Ireland. “It really all depends on the length of the crisis, the level of a shock inflicted on the economy – and what that means for social spending and tax revenues – as well the possibility of second-round economic effects.”

Meanwhile, EU Commission president Ursula von der Leyen said on Friday that Brussels is ready to consider backing the notion of collective debt being issued in the euro zone, with the money channelled to individual governments to help the deal with the economic shock caused by Covid-19.

German chancellor Angela Merkel, who consistently rejected the idea of collective euro zone bonds, or eurobonds, during the sovereign debt crisis, is said to be less resistant to the notion of so-called “coronabonds”.

Brussels is also easing state-aid and normal government debt rules to allow countries support their businesses and economies. Much more will need to be done.

European solidarity was a real casualty in the handling of the euro zone debt crisis earlier this decade, contributing to a rise in populism and eurosceptism across many countries. But unlike the last crisis – when austerity was imposed on Ireland, Greece and Portugal in return for bailouts after reckless economic management – the question moral hazard doesn’t arise as Covid-19 wreaks havoc.

The European project will be tested in the coming months like never before.