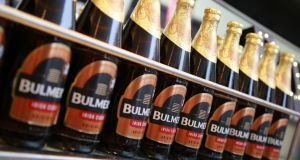 C&C, the maker of Bulmers/Magners cider, has issued a profit warning due to the impact of Covid-19, a little more than a week after telling investors that it was assuming no impact from the virus.

It also revealed it is in talks with tax authorities in the Republic and also Britain over the payment of alcohol duties.

The Clonmel-based company issued a trading statement on Thursday of last week saying it expected “mid- to high single-digit” growth in its earnings per share, although it flagged that it was monitoring the possible impact of Covid-19.

Just eight days later, it did a U-turn on Friday as the impact of pub closures and a collapse in the on-trade in the UK from social distancing measures begins to bite on drink sales.

“Since our trading update was issued earlier this month, market conditions have deteriorated and it is now clear that Covid-19 will have a material impact on group performance in the current financial year,” said the company, which is searching for a new chief executive to replace Stephen Glancey.

C&C said it is “unable to quantify” what the impact might be on sales and profits. But it sought to reassure investors that it could weather the storm. It said it has drawn down €210 million from a bank overdraft facility to top up its cash reserves of €137 million.

“Like others in the sector, we welcome the support from governments and we are actively engaging with the Irish and UK tax authorities with a view to addressing tax and duty liabilities that arise during this downturn in trading.”

The company also said it was shifting resources away from the on-trade to focus on driving sales in off licences, as people are mostly confined to their homes during effective lockdowns in its core markets.