Businessman has been prominent coronavirus sceptic 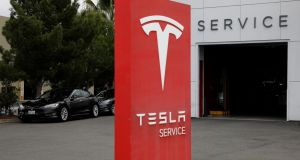 Tesla, the luxury electric carmaker, said Thursday that it would shut down production at its San Francisco factory next Tuesday, ending a standoff with California authorities concerned about the spread of the coronavirus. Photograph: Mike Blake/Reuters

Tesla, the luxury electric carmaker, said Thursday that it would shut down production at its San Francisco factory next Tuesday, ending a standoff with California authorities concerned about the spread of the coronavirus.

The carmaker had caused an uproar by continuing production even after Alameda county officials issued a shelter-at-home order that applied to businesses and individuals. Tesla did not qualify as an “essential business,” which would have exempted it from the order.

As recently as Wednesday, the company was telling employees they could stay home if they were worried about the coronavirus outbreak but would have to use their time off if they wanted to be paid.

“In the past few days, we have met with local, state and federal officials,” Tesla said in a statement Thursday. “Despite taking all known health precautions, continued operations in certain locations has caused challenges for our employees, their families and our suppliers.”

Tesla will also temporarily suspend production at a factory in New York state but work elsewhere, including at its Nevada factory, will continue, it said. Tesla also said that it had continued operating out of its Fremont factory at the “federal government’s direction”.

The confrontation with local officials comes against a background of a serie sof tweets by chief executive Elon Musk casting doubt on the severity of Covid-19 crisis.

He has been downplaying the risk from the pandemic consistently until recent days, stating that it was no more than a strain of the common cold, a claim that he repeated as recently as this week in an email to staff

He has also argued on the social media site that panic over the virus will do more harm than the illness itself, and seemed taken aback that there might be a shortage of ventilators depsite worldwide coverage of the issue.

Earlier Thursday, the Fremont Police Department said on Twitter that its police chief and other city officials planned to meet with Tesla management “to discuss cooperation for compliance” with the order, which took effect Tuesday.

Tesla did not respond to requests for comment but the company’s chief executive, Elon Musk has repeatedly played down the threat of the coronavirus outbreak, which has brought the world economy to its knees, even as he said the company stood ready to produce ventilators for hospitals.

On Twitter, he has described panic over the virus as “dumb,” and on Monday night he emailed Tesla employees inviting them to stay home if they felt ill or uncomfortable, though he said he would still head to work.

“I will personally be at work, but that’s just me,” Mr Musk wrote. “Totally ok if you want to stay home for any reason.”

On Thursday afternoon, after the company’s announcement, Mr Musk predicted on Twitter that “based on current trends” new coronavirus infections would come to a virtual end in the United States by the end of April, which is much earlier than what many public health experts have predicted.

In an email Wednesday, Valerie Workman, Tesla’s head of human resources for North America, said that employees who were reluctant to go to work could stay home without worrying about being disciplined.

Carlos Gabriel, who works at the factory, said he had been frustrated by what he described as the company’s slow and disappointing response to the outbreak.

“Tell us your plan,” he said, adding, “We have to defend our families.”

Mr Gabriel, who said he had been out sick all week with flulike symptoms, also started a petition calling on the company to shutter any plant at the first sign of contamination from the coronavirus and put all employees affected by such closures on paid sick leave until the plants reopened.

Tesla recently began producing its next vehicle, the Model Y, at the Fremont factory. The company also plans to make the Model Y at its new Shanghai factory, which had been shut down earlier in the year as the virus ravaged China but reopened last month.

The company, and its investors, are banking on the Model Y, a sport utility vehicle, to help make Tesla consistently profitable. It sells many more electric cars than any other automaker, but Tesla has not reported an annual profit since it was founded in 2003. The company’s shares fell nearly 7 per cent in extended trading Thursday after it said it was suspending production in Fremont.

In its statement, Tesla said it had $6.3 billion in cash at the end of last year before it raised $2.3 billion by selling more stock, which it said would be sufficient to “successfully navigate an extended period of uncertainty.” The company also said it had access to about $3 billion in credit lines.

On Wednesday, Tesla management told officials in Alameda County that it was reducing the number of employees working at the factory to 2,500 from 10,000, according to Ray Kelly, a county spokesman.

Under the order, businesses deemed nonessential may continue “minimum basic operations,” provided that employees keep six feet from one another as much as possible. It is up to businesses how to determine what fits that definition, Kelly said at the time.

In an email to staff Wednesday night, Tesla asked only essential employees to report for duty at its Bay Area offices and said those who did would get masks and have their temperature checked.

Even as Tesla and Mr Musk appeared to play down the threat of the outbreak, other automakers like General Motors, Ford Motors and Fiat Chrysler announced Wednesday that they would suspend production in North America through at least the end of the month after facing pressure from employee unions.

Yet Mr Musk also said, on Twitter, that Tesla and his other company, SpaceX, could produce ventilators if hospitals had shortages, something GM and Ford are also discussing. Mayor Bill de Blasio of New York responded soon after, saying that the city was interested in buying ventilators and “could use your help.” Mr Musk replied, saying Tesla would connect with the mayor’s office to discuss its needs. – New York Times / Reuters