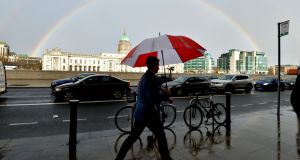 Davy Stockbrokers said it was, for the moment, holding back from revising down its current forecast for 5.5 per cent growth in the Irish economy for 2020 because of the highly uncertain environment. Photograph: Alan Betson

After several years of stellar growth, the Irish economy could contract this year if the coronavirus is not brought “under control quickly”, Davy Stockbrokers has warned.

The company said it was, for the moment, holding back from revising down its current forecast for 5.5 per cent growth for 2020 because of the highly uncertain environment.

“However, plausible scenarios include a significant reduction in GDP [gross domestic product] growth towards 1 per cent if the virus is brought under control quickly or an outright contraction in Irish GDP in 2020,” it said in its latest assessment of the near-term economic outlook.

“For now, Ireland has not imposed the lockdowns seen in Europe. However, the direct impact from the hit to activity in the retail and tourism sector could on its own knock 3 per cent off Irish GDP in Q2 2020,” it said.

Similarly, it said the 58,000 Covid-19 social welfare applications received by the Department of Social Welfare pointed to a 2.5 per cent fall in employment.

One positive was the defensive nature of the State’s export sector, which could prop up growth in 2020.

“In summary, both a swift recovery in output in H2 or a deep contraction in GDP are still plausible paths,” it said.

Davy said it had decided to delay its revision to its current growth forecast until it had more visibility on how long restrictions on travel and economic activity will last.

It also noted that the Government had so far announced a €3 billion – 0.9 per cent of GDP – fiscal package to address the crisis, which was smaller than those announced in other European countries but which is expected to be enlarged.

Mr Mac Coille noted that European Central Bank chief Christine Lagarde was reported to have warned European Union leaders that a one-month lockdown could reduce the ECB’s forecast for 0.8 per cent euro-area GDP growth in 2020 to a 1.8 per cent contraction.

She is reported to have warned that a three-month lockdown would reduce the ECB’s forecast by 5 percentage points to a sharp 4.2 per cent decline in 2020.

“Because the impact of Covid-19 will be front-loaded, some commentators have suggested that UK or euro-area GDP could contract by more than 10 per cent in Q2 2020,” Mr Mac Coille.

1 MSD buys Takeda biologics plant in Dunboyne
2 State’s biggest landlord records 30% rise in rental income
3 Irish tourism must also help itself to survive the pandemic
4 Facebook agrees Irish wind-farm deal with Brookfield in Tipperary
5 ‘Saudi Arabia is where the opportunities will happen in future’
6 Prosecutors suspect Wirecard was looted before collapse
7 Trump signs executive orders banning TikTok and WeChat
8 What will the office market look like after the great remote working experiment?
9 Refurbished Café en Seine doubled sales to €9.5m before pandemic
10 How to build your staff’s resilience while working remotely
Real news has value SUBSCRIBE