Plans for EU digital tax abandoned until end of 2020 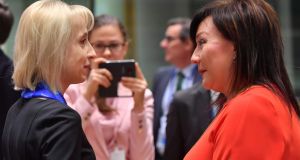 EU attempts to tax the digital giants were laid to rest by EU finance ministers at their Ecofin meeting in Brussels on Tuesday.

They agreed to freeze the measure until the end of 2020 pending work at Organisation for Economic Co-operation and Development (OECD) level.

The measure, which has been strongly opposed by Ireland, never showed any prospect of achieving unanimity, and ministers agreed instead to put their emphasis on building an international consensus on proposals due shortly from the OECD.

Minister for Finance Paschal Donohoe, welcoming the decision, however, told fellow ministers that “given the concerns of our citizens I accept that we will have to make changes globally”.

He said that new approaches would have to reflect the evolution of our economy, and “we really don’t have a digital economy but an entire economy that has been digitised”.

France, which has been at the forefront of the campaign for the digital services tax, last month recognised the inevitability of continued deadlock at European level and finally sealed the tax’s fate by introducing its own national measures.

Fight will go on

But its finance minister Bruno Le Maire insists that the fight for digital taxation will now go on through the OECD and at the Group of 7 which France currently chairs.

A G7 finance ministers’ meeting in July will see new proposals tabled by France and Germany with the support of the US, a senior French official said.

The official said that France would then also be tabling plans for minimum tax rates.

He said that in July 2017, France stood alone making the case for a digital tax; now 23 member states back the idea, a victory in itself. Only Ireland, Sweden, Denmark and Finland opposed the tax in principle, he said, observing that the only real reason to oppose the tax was fear of the US, which is now willing to go ahead.

On Tuesday, however, the US announced that it wants to take France’s new digital tax to the World Trade Organisation.

The French official also complained that it was difficult to understand how four states could block a majority position. “Unanimity means impotence,” he said.

Belgian minister Alexander De Croo told colleagues, in what he described as a heated debate, that “the last thing the single market needs is 28 national taxation regimes”. It was a concern also expressed by commission vice-president Valdis Dombrovskis, who warned of market fragmentation.

The ministers also adopted a revised EU list of non-cooperative jurisdictions for tax purposes. Attempts by Italy to stop the inclusion of the UAE were rebuffed.

The listing process introduced at the end of 2017 “has had a resounding effect on tax transparency and fairness worldwide”, commissioner for economic and financial affairs Pierre Moscovici said. “Thanks to the listing process, dozens of countries have abolished harmful tax regimes and have come into line with international standards on transparency and fair taxation.”