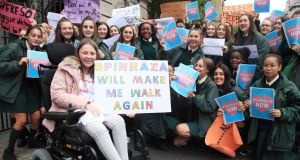 Lauren Whelan (15), from Lorretto Crumlin who is an SMA sufferer with Spinraza activists portesting outside the Dáil. Photograph: Garrett White/Collins

Drug company Biogen has called on the HSE to look again at the proposed pricing for the only available treatment for the rare but fatal muscle-wasting disease spinal muscular atrophy (SMA).

It comes after the HSE informed patients and the company at the end of last week it would not sanction use of the drug on grounds of price.

The HSE said it would cost about €600,000 in the first year to treat each of the 25 Irish children suffering with the disease and €380,000 a year thereafter “with an estimated budget impact in excess of €20 million over a five-year period”.

The drug, Spinraza, is approved in 25 countries around Europe and Ireland becomes just the third country to reject the drug on price grounds. Estonia and the UK are the other two, although the NHS in Scotland has agreed to fund the drug for patients there.

“Biogen provided the HSE with a significant pricing proposal,” the company said in a statement, “absolutely in line with the final price negotiated in countries aligned with Ireland in the Beneluxa initiative, which have each decided to reimburse Spinraza.”

Beneluxa is an initiative involving Belgium, the Netherlands, Luxembourg and Austria to deliver innovative drugs to patients in a timely manner. Minister for Health Simon Harris signed Ireland up to join the group last June. Among its key goals is to allow these smaller markets to work together to negotiate better medicine prices with the industry.

The company said it had also submitted pricing for its portfolio of biosimilars – like for like therapies for expensive biologic drugs that have come off patent – that it says would make “significant savings to the health budget, and substantially offset the cost of nusinersen [Spinraza]”.

“Biogen urgently requests that, in the next 28 days, the HSE re-enters discussions around nusinersen access as a matter of utmost priority,” the company said, adding that it would “continue to play a positive, collaborative role in future discussions”.

The HSE said in a statement that a report from its drugs group noted “the limitations of the current evidence on clinical effectiveness, and the high price being charged by the pharmaceutical company.”

While it was “anxious to provide all possible support to this very vulnerable group of patients and those who care for them... reimbursement could not be approved at the price currently being charged”.

Biogen said that in terms of efficacy, the effectiveness of the drug had been supported by a randomised clinical trial with strong results.

The news comes as a blow to families that have actively lobbied for the drug’s funding since it was approved by the European Medicines Agency in May 2017.

SMA Ireland, which lobbies on behalf of patients with the disease, said in a Facebook post that the HSE had “denied access for Irish people with SMA to the only available treatment for their condition”.

It said the drug-approval process had reached an unjust conclusion, one “that amounts to a death sentence” for the patients affected.

SMA Ireland is planning a protest at Dáil Éireann on Thursday. Speaking earlier this month, Fianna Fáil leader Micheál Martin called for the drug to be approved and said delays in making a decision on the drug had been unacceptable. There was, he said, “significant evidence from countries across the world, and from clinical trials, that Spinraza is changing children’s lives” for the better.