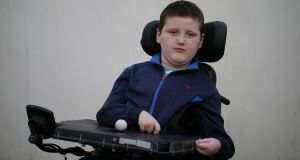 The mother of an eight-year-old boy with a rare fatal muscle-wasting disease has described her son’s condition as a “ticking time bomb”.

Sam Bailey, from Rathcoole, Co Dublin was diagnosed with type 2 spinal muscular atrophy (SMA), which causes progressive muscle weakness and loss of movement, just a year after he was born.

The HSE informed patients and drugs company Biogen last week it would not sanction the use of the drug Spinraza, the only available treatment for SMA, on grounds of price.

Fiona Bailey said her son, who is due to turn nine next week, was given “no hope” of surviving following his diagnosis.

“With Sam’s birthday, it’s a mixed feeling of obviously grateful that he’s still with us and the wonderful young man we see before us, but it fills us with dread because it’s like a ticking time bomb,” she told The Irish Times. “He will not see his teenage years without Spinraza.”

Ms Bailey said it “break’s her heart” to think of how much her son’s condition has deteriorated over the last year.

“At the moment he can’t turn the page of a book, he was able to do that four months ago. He loves reading. While he’s reading, we’ve to turn the pages of his book. I know somebody would say ‘get a kindle’. He doesn’t want to read a kindle, he want to read a book and we have to be at arms to literally turn the page for him. It’s awful for him,” she said.

“He used to be able to lift a pencil, he can’t...The smallest of things that he can still do for himself, he’s doing it with increasing difficulty all the time.”

Spinraza has been approved in 25 countries around Europe while Ireland has become just the third country to reject the drug on price grounds. Estonia and the UK are the other two, although the NHS in Scotland has agreed to fund the drug for patients there.

It is estimated there are about 70 people across the country who have SMA, which includes 25 children.

“Every month that the HSE and the Government are passing the book from one to the other while Sam and all the other children are getting weaker while kids across Europe are getting stronger, suffering from the same condition. It’s just not right,” Ms Bailey said.

The HSE has said a report from its drugs group on Spinraza noted the “limitations of the current evidence on clinical effectiveness, and the high price being charged by the pharmaceutical company”.

The HSE said it would cost about €600,000 in the first year to treat each of the 25 Irish children suffering with the disease and €380,000 a year thereafter “with an estimated budget impact in excess of €20 million over a five-year period”.

“There was money found for a controversy like the Cervical check, and rightly so. People were wronged. Our children are being wronged. As my husband says we won’t need a children’s hospital, we won’t need nurses, if we don’t get Spinraza now for our children, because they won’t be alive,” Ms Bailey added.

SMA Ireland, which lobbies on behalf of patients with the disease, is planning a protest outside Leinster House on Thursday afternoon and present a petition signed by over 90,000 people calling for the Government to provide Spinraza.