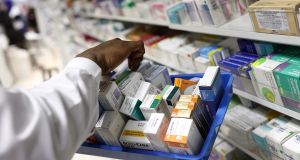 Ten new medicines approved for use by the Health Service Executive last week have been waiting for more than two years on average for sanction, according to an industry group, with one languishing in the approvals process for over four years.

They are among the 15 new medicines that are reported to have used up almost the entire new drugs budget for 2019 less than three months into the year. A further three drugs have had their use expanded to new conditions.

The medicines have generally been blocked on the basis of price following an investigation by the National Centre for Pharmacoeconomics in Ireland.

Three drugs were not sanctioned by the HSE. They include Spinraza, the only treatment currently available for spinal muscular atrophy, and a lung cancer drug called Tagrisso made by British group AstraZeneca, which has been 36 months in the system.

Drugs developed by many of the major pharma companies, including Pfizer, Amgen, AstraZeneca and Johnson & Johnson’s Actellion business, are among those that have now secured approval.

However, the Irish Pharmaceutical Healthcare Association (Ipha), which represents companies investing in the research and development of new drugs, said the length of time that it is taking to get medicines approved is “unacceptably long”.

“No one is arguing that every medicine can – or should – be reimbursed,” said Ipha chief executive Oliver O’Connor, who welcomed the latest approvals. “But it is clear that the approvals system for new medicines doesn’t work and funding is neither predictable nor adequate.”

The latest drugs to come through the system include Translarna, a drug that can help child victims of Duchene’s muscular dystrophy continue to walk. Parents of five boys in Ireland have been fighting a campaign for access to the drug, made by US rare disease specialist PTC Therapeutics.

Two leukaemia drugs – Amgen’s Blincyto and Pfizer’s Besponsa – are also among the new therapies approved, as is Bavencio, a drug for a rare and aggressive form of skin cancer that was developed by German drug company Merck and Pfizer.

The approval for Balencio, the only therapy for Merkel cell carcinoma, comes as Keytruda, a blockbuster drug developed by US pharma group Merck, known in Ireland as MSD, emerges as a potential threat to it in a development that highlights the importance to drug companies of timely approvals.

Another therapy, Amgen’s “bad cholesterol” lowering Repatha, which was also approved, has been lowering its sales price dramatically in the United States in order to persuade institutional payers to approve it for treatment of patients.

The price of the drugs that have come through the Irish system will have undergone extensive negotiation and, as a matter of course, will be considerably lower than the headline price at which they were assessed by the NCPE.

The agency’s director, Prof Michael Barry, said recently that the €10 million HSE budget for new medicines had been consumed by the recent strong of approvals.

The €10 million figure is just 0.4 per cent of the HSE drugs budget, Ipha says. Most other western European countries allow for a minimum of 2-3 per cent growth in the budget to allow for demographic pressures and to provide for medical innovation, it says.

“Three years ago, we chose to do a deal with the State precisely to set certain controls on the price public payers would be charged for our medicines,” said Mr O’Connor. “That deal has delivered hundreds of millions in savings. But there has been no improvement in speed of access for medicines. If anything, things have worsened.

“We must get this right. Otherwise, industry and policy leaders will continue to find ourselves in a zero-sum game, endlessly at odds with each other over what constitutes affordable innovation. The losers will be patients.”