MSD to add 330 jobs at Carlow and Cork plants 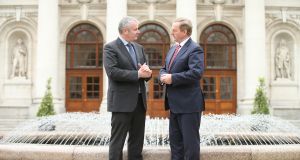 MSD today announced that it will create 330 new jobs and invest €280 million over the next three years at two of its Irish manufacturing sites. Pictured at the announcement are Ger Brennan, managing director for human health at MSD Ireland, and An Taoiseach, Enda Kenny TD. (Photograph: Robbie Reynolds)

Pharmaceutical company MSD announced Tuesday that it plans to create 330 new jobs in Cork and Carlow over the next three years due to increased global demand for the company’s medicines and vaccines.

As part of the growth, the company will invest €280 million in its Irish manufacturing plants.

The new roles at the Carlow and Cork sites include biotechnology, quality and operations positions.

200 of the new hires in Brinny, County Cork, are required to meet demand for work on medicines for lung cancer, melanoma, hepatitis C and rheumatoid arthritis.

In Carlow, the 120 new hires will work on the group’s new immuno-oncology treatment.

“Today, our Irish sites are involved in the production of over 50 per cent of MSD’s global top 20 products, exporting to over 60 countries worldwide and helping lead the development of new life-changing medicines for patients”, said Ger Brennan, managing director of MSD human health in Ireland.

The company currently employs over 1,600 people across its 4 sites in Carlow, Cork, Dublin and Tipperary. Its Irish operations had a turnover of €4.7 billion in 2016. Speaking on the importance of the Irish market, MSD executive vice president, Sanat Chattopadhyay, said: “In recent years our Irish businesses have played an increasingly important role in the production of some of MSD’s most important breakthrough medicines for the global market.”

Martin Shanahan, chief executive of IDA Ireland said, “MSD’s decision to invest in its Irish operations across a number of regional locations further strengthens Ireland’s positioning as a global destination for manufacturing excellence in biopharmaceuticals”.