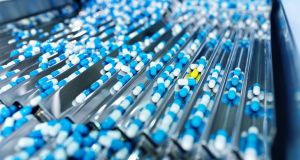 Amryt Pharma says it has made substantial progress since its admission to trading on AIM in April 2016. Photograph: iStock

In a trading statement released ahead of its annual general meeting, chairman Harry Stratford also gave an upbeat assessment of performance in the current year of the company which specialises in finding therapies for rare or “orphan” disease for which no medicine is available.

Amryt said it had enrolled the first patient in a phase III trial for its treatment of genetic skin disorder epidermolysis bullosa (EB), that affects an estimated one in 18,000 babies born in Ireland, according to the charity Debra Ireland, which provides support to families living with the condition.

More than 500,000 people worldwide suffer from the condition in which the skin blisters at the slightest touch for which there is currently no cure. EB is also known as “butterfly skin” in reference to the fragile nature of butterfly wings.

Amryt’s AP101 drug is the Irish company’s lead development asset and the phase III trial is one of the largest studies into EB medication.

The company says the global market for a treatment for EB is believed to be in excess of €1.3 billion.

The company also reiterated guidance that cholesterol drug Lojuxta will generate revenues of €10.5 million on an annualised basis.

Homozygous familial hypercholesterolaemia is a particularly aggressive form of the condition which scientists now believe could affect as many as one in 160,000 people and can cause heart disease in teenagers and even younger children.