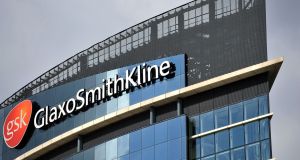 GlaxoSmithKline: has pledged new products will generate £6 billion in sales next year.

GlaxoSmithKline, the UK’s biggest drugmaker, posted a 31 per cent gain in first-quarter profit, helped by a weaker pound and rising sales of its drugs including HIV treatments.

Earnings per share excluding certain costs rose to 25 pence a share, the London-based company said on Wednesday. That compared with the 24.5 pence average of analysts’ estimates compiled by Bloomberg.

The profit gains will likely bolster efforts by chief executive officer Emma Walmsley, who took the helm less than a month ago, to boost revenue from new drugs to help offset eroding sales of top-selling asthma medicine Advair.

The company has pledged that new products such as its blockbuster HIV medicines and vaccines for meningitis will generate £6 billion (€7.69 billion) in annual sales next year.

Glaxo reiterated its February forecast that profit growth this year was at risk of getting wiped out by drugmakers who want to start marketing cheaper copycat versions of Advair in the US.

Profit will rise by 5 per cent to 7 per cent if generic competitors don’t enter the US, the company said, assuming constant exchange rates. If rivals do start selling their versions around mid-year, that could pare US sales of Advair to £1 billion and lead to a “flat to slight decline” in profit growth.

A delay to the launch of Mylan NV’s generic of Advair in the US gives Glaxo more “breathing room” to keep expanding Advair replacement Breo, according to Bloomberg Intelligence.

The drugmaker, which earns the largest chunk of its revenue in the US, has benefited from a decline in the British pound that has boosted its repatriated earnings.