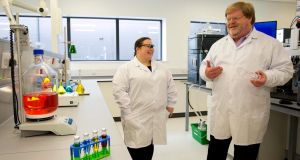 Narcolepsy is a sleep disorder characterised by excessive sleepiness, sleep paralysis, and hallucinations.

One of the main symptoms is cataplexy, which involves the partial or total loss of muscle control, and is often triggered by a strong emotion such as laughter.

Jazz Pharmaceuticals has announced that the second phase of a study of Xyrem, which is a central nervous system depressant, has shown the drug “demonstrated statistically significant differences” from other treatments in dealing with cataplexy in children suffering from the sleep disorder.

Xyrem is Jazz Pharmaceuticals’ biggest drug and was said to have delivered “solid growth” last year by chief executive Bruce Cozadd. Xyrem sales were 16 per cent ahead of 2015 levels and accounted for more than $1 billion of company revenue.

Jazz Pharmaceuticals global head of research and development Karen Smith said she expects the company to recommend the use of the drug for children once the study has been fully completed.

“More than half of all narcolepsy patients report that their symptoms began as teenagers or in childhood,” she said.

“Although narcolepsy in children is characterised by the same symptoms as adults, paediatric narcolepsy is frequently under-recognised and under-diagnosed.”

The full results will be presented at the annual meeting of the Associated Professional Sleep Societies in June.

Ms Smith said the company expects to make a submission to the US Food and Drug Administration “in support of the use of Xyrem in pediatric patients” by the end of the year.

Narcolepsy affects an estimated one in 2,000 people in the United States, and more than half of narcolepsy patients report that their symptoms began as teenagers or in childhood.

The most common symptoms include excessive daytime sleepiness and cataplexy.