Nasdaq-listed company with 1,000-plus staff in Ireland reports Q3 revenue rise of 8% 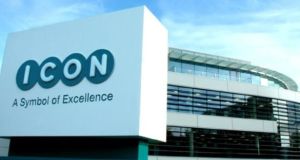 Dublin-headquartered drugs group Icon, which employs more than 1,000 people in Ireland, reported a record number of business wins in the third quarter as revenues rose by nearly 8 per cent.

The Nasdaq-listed company said turnover jumped to $432 million from $400.5 million a year earlier with income from operations rising 12.7 per cent to 19.8 per cent of revenues.

Icon said top customer revenue concentration fell to 24 per cent from 29 per cent year on year.

Net income in the quarter increased by 13.4 per cent to $71.4 million with gross business wins totalling $580 million.

Icon is a global provider of drug development solutions and services to the pharmaceutical, biotechnology and medical device industries. Established in 1990 by Dr John Climax and Dr Ronan Lambe, the company employs 12,300 staff across 87 offices in 38 countries.

Cash generated from operating activities totalled $159.3 million with the group spending $8.3 million on capital expenditure during the first quarter.

The group also spent $96 million on share repurchases as part of its buyback programme with a further $12 million to date in the second quarter. As a result, Icon had net debt of $30 million at the end of March versus $100 million a year ago.

“We have now completed over half of our current share repurchase programme and, as a result, we are increasing our earnings guidance by $0.06 to between $5.06 and $5.26, and reconfirming our revenue in the range of $1.70 to$1.75 billion,” said chief executive Dr Steve Cutler.

“Overall, Icon is well positioned to grow organically supplemented by our M&A strategy which will enable us to capitalise on the long-term growth within the contract research organisation market.”